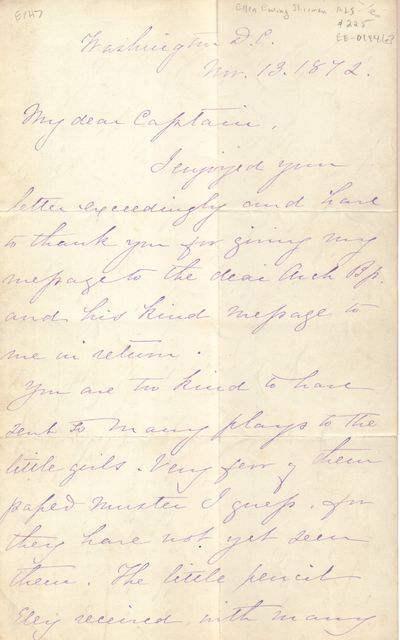 by Sherman, Ellen Ewing
Washington D. C.. 1872. Autograph Letter Signed. Two sheets of unlined paper, 5 x 8 inches previously folded into sixths. Short tears at folds. Purple ink is generally legible. Overall in good condition. Excellent content from the pen of Ellen Ewing Sherman, wife of General William Tecumseh Sherman. Ellen is writing to "My Dear Captain", who remains unidentified but clearly is a friend of the family. She thanks the good Captain for the gifts to the Sherman children and laments the fact that he cannot come visit and promises to entertain late into the night, "Matrimony will cure you of late hours." Later, reference is made to General and Col. Sheridan visiting Washington for General Meade's funeral (Meade passed away on November 8, 1872) but "did not get out to see us. They were exceedingly attentive and kind to me in Chicago." She goes on to note that "the General (surely her husband) has been quite ill since he returned but he is now nearly well." The letter is signed "Ellen Ewing Sherman" which seems to indicate a close friendship with the recipient, as opposed to the more formal and common "Mrs. William Sherman." ; 4 pp; Signed by Author . (Inventory #: 014463)
$225.00 add to cart Available from
Back of Beyond Books
Share this item