The Audion: A New Receiver for Wireless Telegraphy 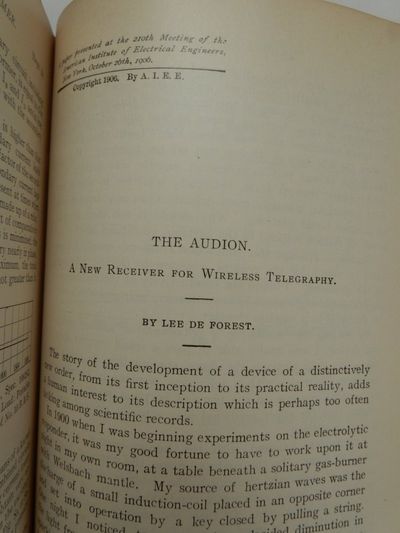 by De Forest, Lee
New York, N.Y.: The American Institute of Electrical Engineers, 1906. First Edition. Cloth. Near Fine. First Edition. viii, 952 pages. 8vo. Publisher's blue cloth with gilt spine titles. Minor wear to the extremities of the binding, recently recased with new endpapers. Offered is the entire year of the Transactions of the AIEE, Vol XXV, Jan to Dec 1906, with a volume title page dated 1907 (as normal). The article by De Forest was presented at the 210th Meeting of the AIEE in NY, October 26th, 1906 and is found on page 735. This format of the Transactions includes not only the paper read by De Forest, but the extensive discussion which followed, and also some discussion that occurred in November of the same year at the Philadelphia meeting. Cloth. Edison's invention of the light bulb and the realization of vacuum tubes enabled a revolution in electronics, particularly in the field of wireless communication. Pioneering work was done by John Fleming and others on vacuum tubes, but it was the invention of the Audion by De Forest (which demonstrated the tube's ability to amplify signals) that revolutionized wireless transmission.

Shiers (History of Telecommunications Technology) calls this paper the "Pioneering paper on the three-element tube." (Shiers 11-016). This paper was quite early in the development of the device - He had applied for a patent on a three element vacuum tube (not the grid version) on October 25, 1906, one day before his presentation to the AIEE. The first public disclosure of the grid type audion wasn't made until March 14, 1907. Davis in his Electrical and Electronic Technologies notes that De Forest ordered the first grid-type audions in November of 1906 from his tube manufacturer H.W. McCandless & Co, the same time period at which this device was being discussed in the 3rd of the articles in this volume.

De Forest won many accolades. The 1922 Medal of Honor from the Institute of Radio Engineers, the 1946 Edison Medal from the AIEE 'For pioneering achievements in radio and for the invention of the grid-controlled vacuum tube with its profound technical and social consequences', and the Edison Medal 'For distinguished contributions to the art of electric communication, notably the regenerative circuit, the superheterodyne and frequency modulation.' (ethw)

In Origins of Cyberspace (#203), Norman and Hook suggest that the Audion was the first successful electronic amplifier.

An early and important work in the development of wireless, radio, and cradle period telecommunications. (Inventory #: 26733)
$550.00 add to cart or Buy Direct from Kuenzig Books
Share this item