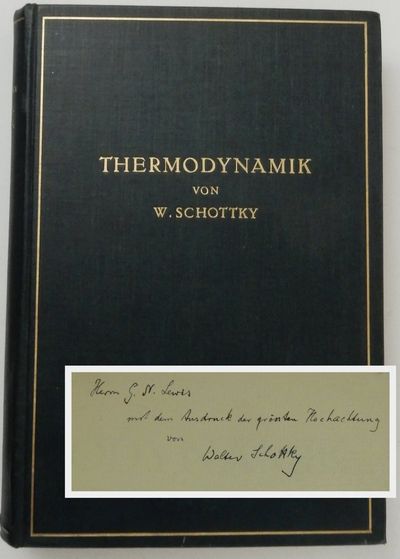 by Schottky, Dr. W. [ Walter ] ; Ulrich, Dr. H.; Wagner, Dr. C.
Berlin: Julius Springer, 1929. First Edition. Cloth. Very Good. First Edition. xxvi, 619, [620], folding table, 2 pages ads. 8vo (7 x 10 inches). Publisher's dark blue-green cloth, gilt titles on front cover and spine. Bump to base of spine. INSCRIBED by Schottky to American chemist G. N. Lewis: "Herr G. N. Lewis mit dem Ausdruck der größten Hochachtung" (with the greatest assurance of respect). Two additional previous owner names on front endpapers. Text in German. Cloth. "Schottky, although a theorist, was the most important industrial physicist in twentieth century Germany. Being one of the 'outstanding research personalities' of the Siemens company, he was granted scientific freedom to pursue problems of pure physics. Thus his contributions include both technological and scientific achievements: invention of the tetrode electron tube and the superhertodyne principle for receiving wireless signals, discover of the 'small-shot effect' (noise due to the quantum structure of electricity) in electron tubes, theory of crystal defects, and theory of rectification in semiconductor-metal contacts....[in the 1950s], still on the Siemens payroll, he played a pivotal role in the establishment of solid-state and especially semiconductor physics as a field of research in its own right in postwar Germany." (New DSB, Vol 6, pp 365-77)

"Gilbert Newton Lewis ... was an American physical chemist known for the discovery of the covalent bond and his concept of electron pairs; his Lewis dot structures and other contributions to valence bond theory have shaped modern theories of chemical bonding. Lewis successfully contributed to thermodynamics, photochemistry, and isotope separation, and is also known for his concept of acids and bases." (wiki)

Schottky dedicates this book to Max Planck and Heinrich Rubens under whom he studied obtaining his Phd in Physics.

Books signed or inscribed by Schottky are rare in the marketplace. A nice association copy between two scientists. (Inventory #: 26727)
$825.00 add to cart or Buy Direct from Kuenzig Books
Share this item