Our Coast Defence by Frye WITH The Rontgen Rays by Woodbridge IN The Bostonian, March 1896 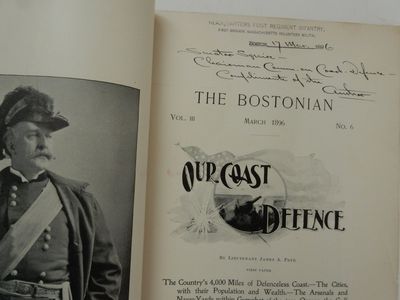 by Frye, Lieutenant James A. ; Woodbridge, A. A. Ph.D.
Boston, Massachusetts: The Bostonian Publishing Company, 1896. First Edition. Wraps. Good. First Edition. VI, [513]-612 pages plus advertisements front and rear. Original pictorial stapled wrappers. Covers soiled, with wear at the extremities. Front and rear wrappers in color (blue and red). Rear inside wrapper with advertisement for Edison phonographs. Wraps. Contains two articles of real interest. The first, "Our Coast Defence" [pp. 513-533] is by Lieutenant James A. Frye and is SIGNED on the issue's first page "Senator Squire - Chairman Comm. on Coast Defence - Compliments of the Author" and stamped Headquarters First Regiment Infantry, Boston, 17 March, 1896. It speaks of the 4000 miles of our countries defenceless coast, and what Congress has done, and left undone, in the task of protecting the country. A familiar theme, even in 2017!

The second article is on the new phenomena of Rontgen Rays by A. A. Woodbridge. On pages 570-576, it includes a plate of the apparatus, an image of an ray'd hand, and a good deal of philosophical and pseudo-scientific analysis on the part of Woodbridge. It is not surprising that there is little definitive to say - after all, Rontgen rays (better known today as X-Rays) had only been discovered a mere 5 months earlier in November of 1895. Everyone knew it was important, and would change things, but few knew how or to what extent. An interesting view into one PhD's thoughts at the time. (Inventory #: 26731)
$44.00 add to cart or Buy Direct from Kuenzig Books
Share this item