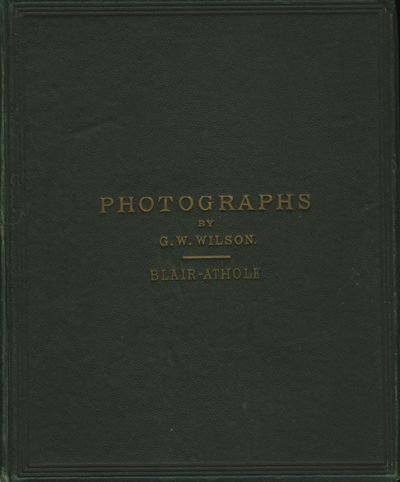 by Wilson, G. W. [George Washington]
Aberdeen: Printed by John Duffus, 1866. First edition. 8vo., 12 card leaves with mounted albumen photographs, followed by a descriptive letterpress leaf. Light foxing to a few descriptive leaves, heavier on the title page and last leaf; the albumen photographs are richly toned, with the usual light fading at the edges, and in very good condition. All edges gilt and bound in green cloth over beveled boards with rules in blind and titled on the upper cover in gilt; moderate rubbing. The rear board shows evidence of an early dampstain and the front hinge is slightly tender. A very good copy. George Washington Wilson, born in Aberdeen 1823, began his professional career as a portrait and landscape painter. By 1852, he opened a photographic portrait studio in Aberdeen, which thrived, and in 1860, he was appointed as the photographer for Queen Victoria in Scotland. He was a prolific landscape photographer of the British Isles, selling his work in great quantities to the tourists, among others. From 1865 - 1868, he published, PHOTOGRAPHS OF ENGLISH AND SCOTTISH SCENERY, a series of 12 books, each on a specific area or village, and each with 12 mounted albumen photographs. Blair Athol is a village in the Scottish Highlands.

THE HUMAN FIGURE IN MOTION:; AN ELECRO- PHOTOGRAPHIC INVESTIGATION OF CONSECUTIVE PHASES OF MUSCULAR ACTIONS

London : Chapman & Hall , 1901
(click for more details about THE HUMAN FIGURE IN MOTION:; AN ELECRO- PHOTOGRAPHIC INVESTIGATION OF CONSECUTIVE PHASES OF MUSCULAR ACTIONS)
View all from this seller>