ALLEGHENY CEMETERY:; HISTORICAL ACCOUNT OF INCIDENTS AND EVENTS CONNECTED WITH ITS ESTABLISHMENT. CHARTER AND SUPPLEMENTAL ACTS OF LEGISLATION. REPORTS OF 1848 AND 1857. PROCEEDINGS OF CORPORATORS, JUNE 21, 1873. RULES, REGULATIONS, &C. LIST OF OFFICERS, MANAGERS AND CORPORATORS TO DATE. REMARKS ON THE ORNAMENTATION AND ARRANGEMENT OF CEMETERIES. FUNERAL ORATION OF WILSON McCANDLESS, ESQ. ON COMMODORE BARNEY AND LIEUT. PARKER. ILLUSTRATED WITH SIXTEEN PHOTOGRAPHIC VIEWS 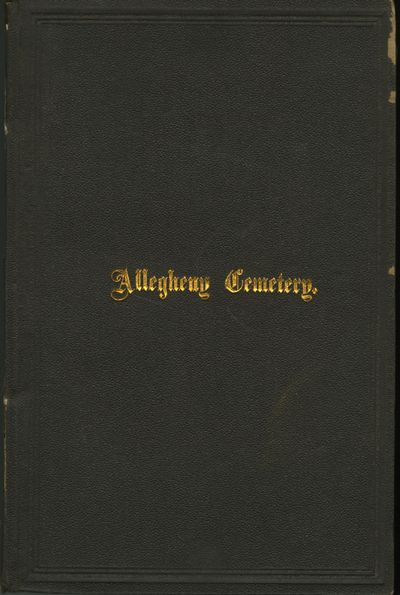 by McCandless, Wilson, et al.
Pittsburgh: Bakewell & Marthens, 1873. First edition. Albee, S.V.. 8vo., vii, 166 pp., with 16 full-page salted paper photographs by S.V. Albee. Two cracks to the cloth along the spine (still firm) and light flaking at the foredge of the front and rear boards. A very good copy. Allegheny Cemetery is one of the oldest and largest cemeteries in the United States, with its landscaping and monuments of great beauty. The photographs by S.V. Albee, which have a slightly greenish tint are likely to be uranium prints, developed in a solution of sulphate of iron, acid and diluted with water, which accounts for their faint appearance. These photographs highlight the architectural qualities of the monuments.

The Carnegie Museum of Art provides the following biography for S. V. Albee: Born in Thomaston, Maine, Seth Voss Albee moved to Pittsburgh in 1867, where, by 1871, he was advertising his skills as an outdoor and view photographer. In 1876 a committee appointed by the Central Board of Education commissioned him to photograph all principal school district buildings in Pittsburgh. The following year Albee captured images of what came to be known as the Railroad Strike of 1877, which he published as a series of forty-two stereograph cards consisting of egg albumen prints from collodion negatives. These remarkable images were photographed during battles between the railroad strikers and the state militia and occasionally included his own photographic wagon in the foreground. The aftermath of battle is also shown in many views, from burned passenger cars in the Union Depot to mangled pieces of machinery littered throughout the rail yards. Other images depict the curiosity seekers who visited the devastation and became, for Albee, an integral part of his reporting. These stereographs of the Railroad Strike are regarded as the earliest surviving photographs of an American labor dispute.

In 1879 Albee advertised as a "Practical Business Photographer in the Industries of Pennsylvania," setting forth his qualifications: "Here is clearly manifest to the connoisseur a natural gift conjoined with a scientific knowledge of chemical adaptation in the production of the desired light and shade, especially in his success in securing correct lines, and the skill and taste necessary to produce the strongest and most subtle life-like effect." Albee occupied several studios in downtown Pittsburgh, the last of which was located at 99 Fifth Avenue, where he produced various types of photographs, specializing in "Architectural and Mechanical Photography, also of Painting in Oil or Water Colors, Crayon Work, and to taking of enlarged views of landscapes." (Inventory #: 52383)
$600.00 add to cart or Buy Direct from
Andrew Cahan: Bookseller
Share this item
Andrew Cahan: Bookseller, Ltd.
Offered by