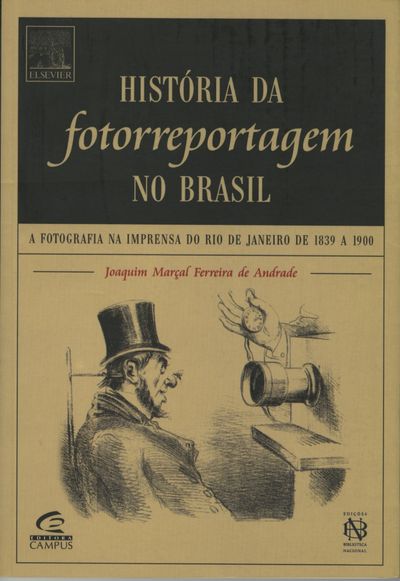 by Andrade, Joaquim Marcal Ferreira de
Rio de Janeiro: Elsevier Editora Ltda, 2004. First edition. 8vo., xv, 281, [2] adverts., illustrations from drawings and photographs in text. Illustrated stiff wrappers with printed inner flaps. Fine. "The dissertation is based on exploratory research, covering the period during which the photographic image starts to be incorporated by the illustrated periodical press in the city of Rio de Janeiro. Thus the universe of the present research includes all periodical publications locally printed between 1839 (the year of the announcement of the invention of the daguerreotype, the first photographic process to be patented and commercially explored in the world) and 1900, which marks the end of an outstanding century under several aspects, when the country starts its second decade under the new republican regime, going through severe political, economical, social and cultural changes which, naturally, were reflected in the press. By the turn of the century, the fact that photomechanical processes were both technically and commercially well developed and also the fact that photographic technology had been quite perfected, would give raise to a change in attitude on what concerns the uses of photography in early XXth century Rio de Janeiro illustrated periodical press. Photography finally moved away from caricature and reached a gradual autonomy as a means of communication and expression. One thousand, one hundred and twenty six collections of periodicals published in the city of Rio de Janeiro (which belong to the microfilm collections of the National Library) were examined. The work aimed at detecting the first uses of photography, putting them into minimum context including the technologies employed. It also distinguishes two relevant marks in the process of photography incorporation by the local illustrated press the first in A Semana Ilustrada (1860-1876) and the second in O Besouro (1877-1878)." [abstract of the original thesis]