THE VETO POWER: ITS NATURE AND HISTORY; THE DANGER TO THE COUNTRY FROM ITS EXERCISE AND THE TRUE POSITION OF PARTIES AND PRESIDENTIAL CANDIDATES IN RELATION TO IT. BY CHARLES D. DRAKE, OF CINCINNATI, OHIO 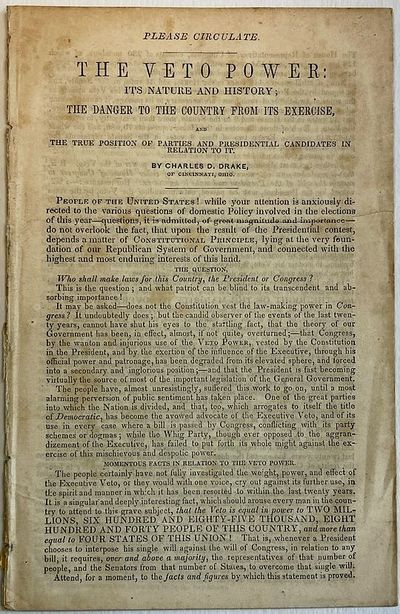 A Whig argument against executive tyranny, alleged to be the practice of Democratic Presidents, particularly Andrew Jackson. Lewis Cass, the Democratic presidential candidate, will exercise the veto power promiscuously, thus destroying "the very first principle of our Republican System- THE RIGHT OF THE MAJORITY TO GOVERN." Because "every minority government is in principle a despotism...that should be enough to excite in every American freeman an intense jealousy of the Veto power, and an unyielding and sleepless opposition to its improper exercise."
Drake, originally from Cincinnati but who became a United States Senator from Missouri, reviews the history of the veto, in England and America, particularly under Jackson. The Whig candidate, Zachary Taylor, will defend majority rule, and assure government of the people.
FIRST EDITION. Sabin 20817. Not in Thomson, Eberstadt, Decker. (Inventory #: 34318)
$150.00 add to cart or Buy Direct from
David M. Lesser, Fine Antiquarian
Share this item
David M. Lesser, Fine Antiquarian Books LLC
Offered by

STATIONERY SHOWING THE ICONIC LOG CABIN, WITH AMERICAN FLAG FLYING, A BARREL OF CIDER IN THE FRONT YARD, AND A PORTRAIT OF HARRISON, WITH ACCOMPANYING LETTER IN INK MANUSCRIPT DATED SEPT. 8, 1840 FROM BOSTON


(click for more details about STATIONERY SHOWING THE ICONIC LOG CABIN, WITH AMERICAN FLAG FLYING, A BARREL OF CIDER IN THE FRONT YARD, AND A PORTRAIT OF HARRISON, WITH ACCOMPANYING LETTER IN INK MANUSCRIPT DATED SEPT. 8, 1840 FROM BOSTON)
View all from this seller>