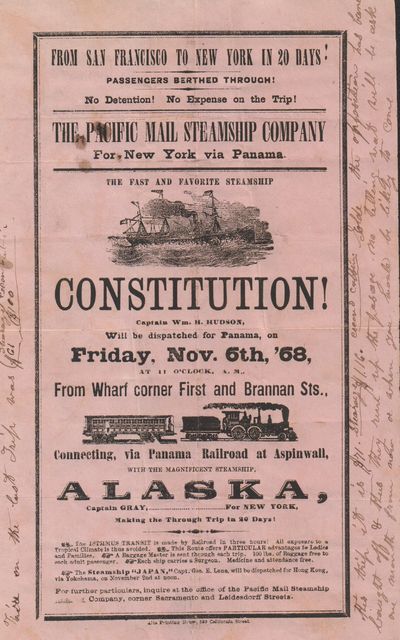 1868. Broadside. Pink broadside measuring 9" x 5 ½" with text, border and illustrations in black. In very good condition with light soiling, affecting some content, light creasing where once folded, and light wear to top edge; light soiling and foxing on verso. Broadside reads: "From San Francisco to New York in 20 Days! Passengers berthed through! No detention! No expense on the Trip! The Pacific Mail Steamship Company for New York via Panama. The Fast and Favorite Steamship Constitution! Captain Wm. H. Hudson, will be dispatched for Panama, on Friday, Nov. 6th, '68, at 11 O'clock, A. M. , from Wharf corner First and Brannan Sts. , Connecting, via Panama Railroad at Aspinwall, with the magnificent steamship, Alaska, Captain Gray…For New York, Making the Through trip in 90 days." Underneath this larger print are specifics about isthmus transit and information on the Steamship "Japan" which would be dispatched to Hong Kong and Yokohama. Manuscript notes are in the margins which compare prices of trips "Fare on the last trip was Stearage [sic] $61…this trip it is $71." In the mid 19th century steamships were the preferred means of transport of people and goods from coast to coast. The Pacific Mail Steamship Company began transporting mail through a contract with the U. S. Government in 1848, transporting their goods from the Isthmus of Panama to California. With the discovery of gold, California became a prime destination and the transport of people, as well as mail, became very profitable. This was the preferred way to transport until the completion of the transcontinental railroad in 1869. "Steamship Japan" mentioned in small print, procures an important piece of cultural history of California, documenting the route between San Francisco, Hong Kong, and Yokohama, and the diversity brought with it. This broadside provides a beautiful record of U. S. maritime and transport history. Not found in commerce or OCLC. . (Inventory #: 014469)
$1,100.00 add to cart Available from
Back of Beyond Books
Share this item

New York City : Association of Licensed Automobile Manufacturers , 1907
(click for more details about Handbook of Gasoline Automobiles - For the Information of the Public Who Are Interested in Their Manufacture and Use)
View all from this seller>