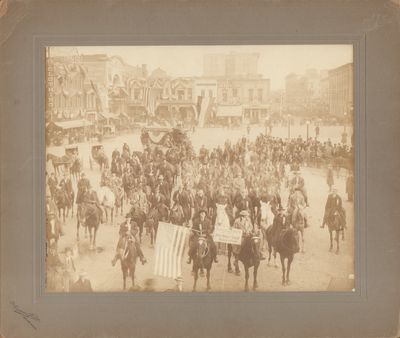 Springfield, MO: Duncan Studio. Photograph of the Anti Horse Thief Association mounted on gray cardboard. Photograph measures 8" x 10", not including mount, and is in very good condition. Photo has minor chipping to bottom right corner, light ink markings on left edge. Image is quite detailed and clear. Dated between 1900 and 1910. The photograph was published by A.B. Duncan of Duncan Studio in Springfield, Missouri. This image depicts the Nichols Sub Order, No. 300, of the Anti Horse Thief Association gathered together in the Public Square of Springfield, Missouri. Some buildings are clearly signed such as Weaver Shoes, Nathan Clothing Co and Ozark Land Co. which help to identify the location. When this scene was photographed the popular forms of transportation were carriages and horses, with only one automobile depicted. The form of transportation and the number of stars on the American flag (45) help to distinguish a date for the photo. The men of the Anti Horse Thief Association are almost all on horseback, many having a badge or ribbon pinned to their jackets and most staring at the camera. The Anti Horse Thief Association was organized in Clark County, Missouri in 1854; its principle goal was the protection of property, especially horses, at a time when horses were frequently stolen by thieves. The Anti Horse Thief Association was not a vigilante group, preferring to catch the criminals and hand them over to the court system. The Association quickly grew and in 1916 had over forty thousand members in Oklahoma, Kansas, Missouri, Iowa, Illinois, Arkansas, New Mexico, Colorado, and South Dakota. The emblem of the Association, the horseshoe, represents Humanity, Charity and Justice. A great photograph of a respected league of crime fighters. . (Inventory #: 014471)
$750.00 add to cart Available from
Back of Beyond Books
Share this item