We Will Not Allow the Defeated Counterrevolution to Rear its Ugly Head. Council of State declaration January 18, 1992. Editorial January 21, 1992. Translation: Granma International 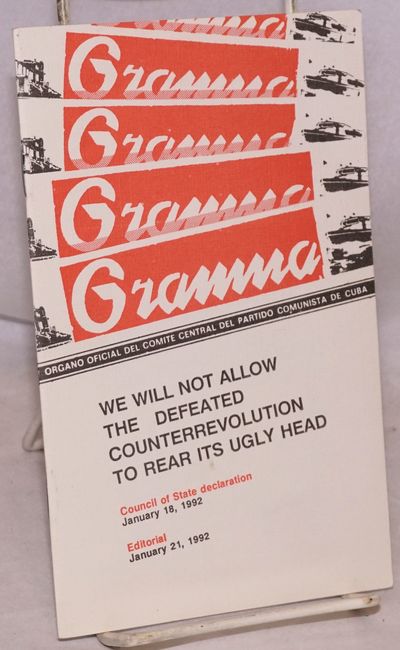 by Aguirrechu, Iraida and Ana Gort, editors; Council of State, corporate author
La Habana: Editora Politica, 1992. Pamphlet. 19p., softbound, small stapled pamphlet in 7.5x4.5 inch decorated wraps. Clean and absolutely sound, a fine copy. Granma: organo oficial del comite central del partido comunista de Cuba. "..whether or not to exercise its right to show mercy regarding execution by firing squad for Diaz Betancourt and Santovenia Fernandez, who formed part of a terrorist command from the United States which carried weapons, grenades, explosives and other military supplies, and infiltrated Cuba in the middle of the night on December 29 in the area known as Ensenada del Jucaro.. (Inventory #: 219101)
$20.00 add to cart or Buy Direct from Bolerium Books
Share this item