Arthurian Trilogy: The Sword in the Stone, The Witch in the Wood, The Ill-Made Knight 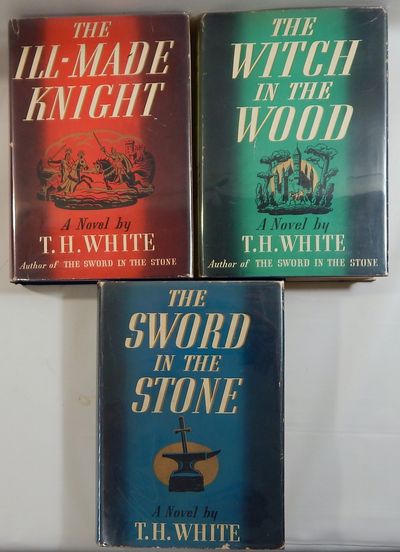 by White, T. H.
New York: G. P. Putnam's Sons, 1940. First US editions. Near fine. Hardcover. 8vo. Original decorated blue cloth, front and spine panels stamped in gold, top edges stained red, fore-edges untrimmed. Small illustrations in the text by the author, endpapers of the first volume illustrated by Robert Lawson. Near fine copies with only traces of wear and age. The first volume has a booplate on the first blank, and the second has a neat stamped ownership name on the front free endpaper. None of the dustwrappers are price-clipped. The spines are lightly sunned, else they are in fine condition with only traces of wear, mainly at the edges, though the third volume has some rubbing on the spine. . he first three parts of "The Once and Future King". Fantasy Literature, p. 174. Barron (ed), Fantasy Literature 4A-266. Cawthorn and Moorcock, Fantasy: The 100 Best Books 54. Pringle, Modern Fantasy: The Hundred Best Novels 20. Schlobin, The Literature of Fantasy 1116. Survey of Modern Fantasy Literature III, pp. 1149-57. In 333. Bleiler (1978), p. 208. Reginald 15254. This is the only edition of the second title; it was replaced entirely in the reprint. (Inventory #: 20250)
$3,500.00 add to cart or Buy Direct from Thorn Books
Share this item

by Stols, Alexandre and Juan Pascoe

China : n.p. , 1920
(click for more details about Picture Story of Mu Lan)
View all from this seller>