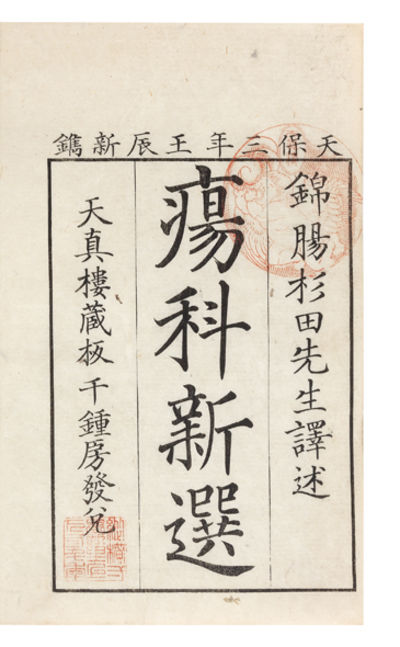 by PLENCK (or PLENK), Joseph Jacob, Ritter von
37; 22; 17; 25; 21 folding leaves. Five vols. 8vo, orig. wrappers, orig. block-printed title labels on upper covers, new stitching. Edo, Osaka, & Kyoto: 1832. First edition in Japanese and an important book. "Kincho or Rikkyo [or Rikkei or Ryukei] Sugita (1786-1846), the son of the famous Gempaku Sugita, published a work in five volumes in 1830 [this is wrong or a typo; the correct date is 1832] entitled Yoka shinsen, which was a translation of [the Dutch translation] of Joseph Jakob von Plenck's Compendium institutionum chirurgicarum... (Viennae: R. Graeffer, 1780). The Yoka shinsen was important as the first complete translation of a Dutch surgical work into the Japanese language."-Mestler, A Galaxy of Old Japanese Medical Books. III, p. 157. Vols. I and II are concerned with tumors; Vol. III with ulcers; Vol. IV with wounds; and the fifth volume deals with pharmacology. In this volume, many of the drugs appear with Latin and Dutch names and Japanese translations. Plenck (1738-1807), a member of the Viennese School, was, at one time or another, professor of chemistry, botany, surgery, anatomy, and obstetrics at the Joseph Academy at Vienna. Fine fresh set. ❧ Sugimoto & Swain, Science & Culture in Traditional Japan, p. 386-"the crucial work on surgery was Yoka shinsen (New selections on surgery) by Sugita Ryukei (1786-1845; Genpaku's son by a mistress), which was printed in 1832.". (Inventory #: 5995)
$5,500.00 add to cart or Buy Direct from
Jonathan A. Hill, Bookseller
Share this item
Jonathan A. Hill, Bookseller, Inc.
Offered by