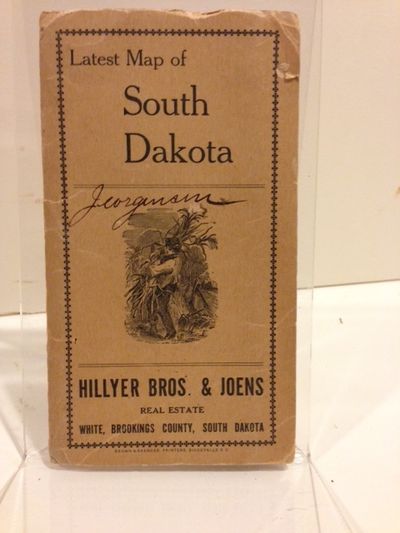 by Hillyer Bros. & Joens Real Estate
Sioux Falls, S.D.: Brown & Saenger, Printers, 1915. Folding map, 32 x 47 cm., on a 44 x 55 cm. sheet, tipped into tan paperwraps with a small illustration of a farmer on the front wrap, a township and range grid printed on the rear wrap. Previous owner's signature on front wrap. Map and counties outlined in red, with a few counties in the eastern portion of the state colored in yellow. Indian reservations shown. Title on the map: "South Dakota" by E. Frank Peterson, Lake Andes, S.D., publisher of the "Illustrated Historical Atlas of South Dakota." Printed for Hillyer Bros. & Joens Real Estate, White, Brookings County, South Dakota, who advertise in the borders of the map offering "fine improved farms from $50 to $95 per acre." Date implied from the inset chart of "average yields of the twenty principal corn growing states of this country for 1915." Peterson's map was used by several real estate companies to promote settlement in the state. No OCLC listings found for this particular real estate company, though there are several similar. A nice, crisp copy, with a bit of wear to the outer wrappers. (Inventory #: 62157)
$375.00 add to cart or Buy Direct from
Bartleby's Books
Share this item

McCLELLAN: From Ball's Bluff to Antietam

PRINTED LYRICS FOR THOMAS DARTMOUTH RICE'S "JUMP JIM CROW," adapted from traditional "plantation" music, cut into strips, evidence of old hand-stitching at left margins, once connected together to form a "book," and erratically numbered in ink on versos of the strips

[NP : np , 1835
(click for more details about PRINTED LYRICS FOR THOMAS DARTMOUTH RICE'S "JUMP JIM CROW," adapted from traditional "plantation" music, cut into strips, evidence of old hand-stitching at left margins, once connected together to form a "book," and erratically numbered in ink on versos of the strips)
View all from this seller>