The Children of the Sea: A Tale of the Forecastle. 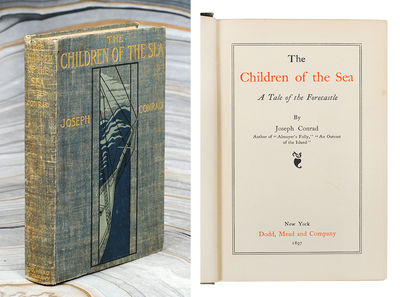 by Conrad, Joseph.
New York: Dodd, Mead and Company, 1897. 8vo., [iv], 217 pp., title-page printed in red and black within a double-ruled border, with a hedera. Original pictorial light-blue cloth with lettering in gilt, and backstrip with lettering in gilt. Boards a bit rubbed around the edge, faint foxing to outer margins, small chip to the top-edge of the last leaf of text; very good. § First edition, first printing, in original cloth. With "Island" for "Islands" on the title-page, and the headline and page number not printed on p. 58. Only 1000 copies of this edition were printed (including those issued with the 1898 title-page), this tale would thereafter be published with the title The Nigger of the Narcissus, which was the title originally offered by the author, but changed by the publishers who argued that the American public would not be interested in a book about a Black man. The original title was restored for all subsequent editions, making this variant-titled edition one of the more sought after of Conrad’s works. Cagle A3b; Keating 9; Smith 3; Wise 4. (Inventory #: 106022)
$500.00 add to cart or Buy Direct from
John Windle, Bookseller
Share this item