Lectures on Sculpture, as delivered before the President and Members of the Royal Academy. Second edition. 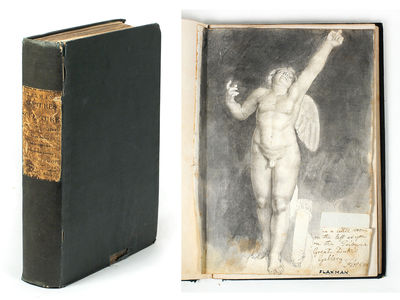 by Flaxman, John.
London, Henry G. Bohn. 1838. 8vo, xxvii, 243pp. Portrait frontispiece on India paper, 51 plates (complete, enclosed publisher's slip states that plate #18 was never engraved). Original green cloth with printed paper spine label, rubbed and worn. Pp.33-48 are missing but this is more than made up for by the extra illustration of the book with 28 original pages of sketches by Flaxman from his sketchbooks, many of which appear as plates in the book. § Walter Crane’s copy which ended up in the possession of Shane Leslie, first cousin of Winston Churchill, at Castle Leslie in Co. Monaghan, after it was acquired by his father Sir John Leslie a friend of the Pre-Raphaelites. This book was acquired directly from the Leslie family. “In an age much given to the cultivation of classic art and virtue, Flaxman, even as a lad, with no models before him except the plaster casts of his father's shop, had shown in his drawings and models an instinct beyond that of any of his contemporaries for the true qualities of Greek design. He had the secret, almost lost to modern art, of combining ideal grace of form and rhythmical composition of lines with spontaneousness and truth of pose and gesture, and the unaffected look of life. Sketching constantly, as was his habit, with pen and pencil the leading lines and masses of every scene and every action of daily humanity that caught his attention within doors or without, and at the same time studying ardently, since his arrival in Italy, the works of Greek design in ancient vases and bas-reliefs, he had greatly strengthened his natural gifts both for linear design and the expression of life and action. The best of the outlines to the Greek poets and Dante and they are those which represent subjects of grace and gentleness, rather than subjects of violence or terror, are worthy of all the praise they have won. Their success was immediate and universal. Fuseli, whose foible was certainly not diffidence, at once declared himself outdone as a designer. Canova, the prince of Italian sculptors, was generous in recognising those qualities in Flaxman which he lacked himself, and praised his work without stint. Schlegel, the chief of German critics, extolled it a few years later more vehemently still. French taste, then running towards ancient ideals, was equally favourable, and from within a few years of the publication of these designs until our own time the name of Flaxman has been perhaps more known and honoured abroad than that of any other English artist." DNB. (Inventory #: 108503)
$18,500.00 add to cart or Buy Direct from
John Windle, Bookseller
Share this item

Epicurus. The Extant Remains of the Greek Text.

New York : The Limited Editions Club , 1947
(click for more details about Epicurus. The Extant Remains of the Greek Text.)