The Surgeon at Work at the Rear During an Engagement. 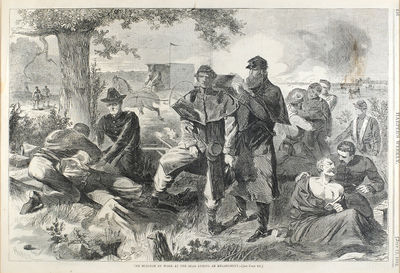 by Homer, Winslow.
Harper’s Weekly, July 12, 1862. Single leaf, 10 11/16 x 15 3/4”, wood engraving with title information, text and ads to verso. Mounted, with some small tears, and chipping and foxing to edges; good. § This wood engraving appeared in the same issue of Harper’s Weekly as "The War for the Union, 1862—A Bayonet Charge," but focuses on intense life-saving work behind the lines instead of the immediacy of battle. Homer spent time with the Army of the Potomac in Virginia during the summer of 1862 and drew his figures from life. Here he describes a small medical staff operating on wounded soldiers who lie on the ground while conflict rages in the distance. The Met, 29.88.3(2). (Inventory #: 108204)
$125.00 add to cart or Buy Direct from
John Windle, Bookseller
Share this item