The Nigger of the “Narcissus” A Tale of the Sea. 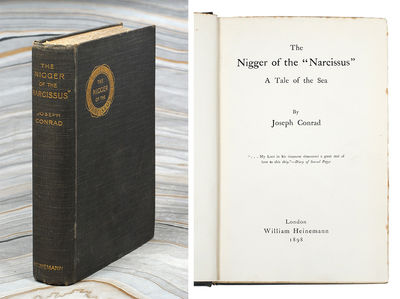 by Conrad, Joseph.
8vo. London: William Heinemann, 1898. 8vo., [viii], [1]-259, [4 ads], [16 ads] pp. Original gray cloth with gilt title in the center of a gilt life-preserver, backstrip with gilt lettering and publisher’s imprint in small uniform capitals, uncut. Some minor rubbing to board edges and faint foxing at edges; very good, with terminal ads unopened. § First English edition, published actually in 1897. This copy has the 1897 ad catalogue, indicative of the first state. Joseph Conrad (1857–1924), was a master mariner and author. Considered a manifesto of literary impressionism, and the greatest of his early works, Conrad sums up his intention well in a preface added to subsequent editions: “A work that aspires, however humbly, to the condition of art should carry its justification in every line. And art itself may be defined as a single-minded attempt to render the highest kind of justice to the visible universe, by bringing to light the truth, manifold and one, underlying its every aspect. It is an attempt to find in its forms, in its colors, in its light, in its shadows, in the aspects of matter and in the facts of life what of each is fundamental, what is enduring and essential-their one illuminating and convincing- quality - the very truth of their existence.” (Inventory #: 106013)
$1,175.00 add to cart or Buy Direct from
John Windle, Bookseller
Share this item

A Study of the Illuminated Books of William Blake, Poet, Printer, Prophet.

London and Paris : The Trianon Press , 1964
(click for more details about A Study of the Illuminated Books of William Blake, Poet, Printer, Prophet.)

London : Trianon Press , 1969
(click for more details about Europe A Prophecy.)
View all from this seller>