Three Albums of Monograms and Crests worked into Original Watercolors 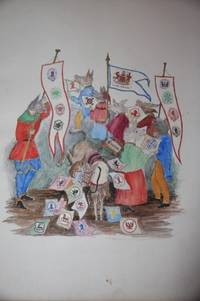 Half Morocco, Pebbled Cloth
Half Morocco, Pebbled Cloth. Very Good. N.d., 1870s or 1880s. English in original. Albums are each 35 by 29 cm. In total, 309 original artworks incorporating monograms, crests and very occasionally other die-cuts, these being the size of typical monograms. Of these 309 separate specimens, we would say that 79, or slightly over 25 percent of them, stand out as extraordinary in some way compared to the more pedestrian monogram and crest album. Into this "extraordinary" category we would hold out as the most special those artworks which tell a story of some kind, such as one illustration in which we see cats tumbling into a tub. In another, manned balloons are flying over a coastal area. Then we include as "extrordinary" the wider category of paintings which have human and/or animal subjects, even if they do not have quite the same narrative thrust to them. To list just a few of these, there is the boy in a turban, the painting of a concubine, a boy with a kite, a painting of a peacock, of a cow, of butterflies . . . Also special, in our judgment, are paintings of objects that were not conventions in the monogram album, and particular objects that are elaborate, including a painting of an organ. Then there is the larger number that we are not categorizing as extraordinary, that isn't meant to disparage these, which can also be quite strikingly beautiful, and some of them are surely unique in their specific design. We throw into this larger grouping all the artworks which are fundamentally geometric designs, kaleidoscope-like, or of simple objects or objects which are comparatively common in the genre of monogram albums. We would note that these, too, are still painted by the artist, whereas in the majority of monogram albums the designs are printed. The geometric designs can also be very elaborate -- we make no distinction for the purposes of our general categorization -- and separating the more common and/or simple objects from the more rarefied ones is obviously a judgment call on our part. (Inventory #: 005853)
$24,000.00 add to cart Available from
White Fox Rare Books & Antiques
Share this item
White Fox Rare Books and Antiques
Offered by