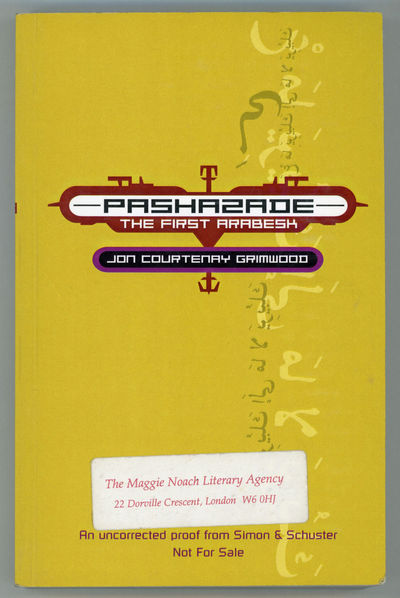 by Grimwood, Jon Courtenay
London, New York, Sydney, Tokyo, Singapore, Toronto, Dublin: Earthlight Simon and Schuster, 2001. Octavo, pictorial wrappers. Advance copy (uncorrected proof) of the first edition. Presentation copy with signed inscription by Grimwood to "Kathy" on the title page. First book of the "Arabesk" sequence, followed by EFFENDI: THE SECOND ARABESK (2002) and FELAHEEN: THE THIRD ARABESK (2003). The "Arabesk" series "is set in the near future North Africa of an alternate history world in which Germany won World War One ... a very contemporary world ... simultaneously hard-boiled and shifty. Most of the SF elements in the trilogy -- in particular the turns of plot based on genetic engineering -- add to a sense that the world Grimwood depicts is as predetermined and as volatile as the twenty-first century world he engages." - John Clute, SFE (online). "Grimwood has frequently addressed the twin themes of identity and the autonomy of artificial intelligence in his novels, but PASHAZADE, and its sequels EFFENDI and FELAHEEN, tackle these issues head-on. Set in a small North African country, in the not-so-distant future, the series follows the fortunes of Ashraf Bey or Rafi, a young man of uncertain parentage and identity, who possesses a body that has been augmented with some sort of AI. His efforts to maintain a stable persona as Rafi, distinct from his AI and from his former identity, ZeeZee, reflect the struggles of El Iskandriya, his newly adopted country, to maintain its own political autonomy in the face of threats from larger powers and from internal political threats that would otherwise tear the country apart. Thus Grimwood explicitly makes the personal political and vice versa, all this set against the backdrop of a vividly realized desert landscape." - Anatomy of Wonder (2004) II-470. Corner tips just a bit rubbed, a nearly fine copy. (#157490) (Inventory #: 157490)
$75.00 add to cart or Buy Direct from L.W. Currey
Share this item
L.W. Currey Inc.
Offered by