Caminos Viejos: Tales Found in the History of California of Especial Interest to Those who Love the Valleys, the Hills and the Canyons of Orange County, its Traditions and its Landmarks 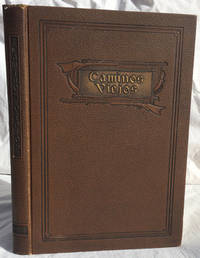 by Terry Elmo Stephenson (1880-1943)
Santa Ana, CA:: Press of the Santa Ana High School and Junior College,, 1930. First Edition. Hardcover. Very Good. DE LUXE LIMITED EDITION of 500 copies, this is number 153 of the revised edition, the first having been printed earlier in 1930. Large 8vo. [xx], 111, [1 blank] pp. Half-title, frontispiece of Don Gaspar Portola with tissue guard, title (and text) printed in red and dark brown inks, limitation page, 6 chapter headpieces (these and the frontispiece by Jean Goodwin and Arthur Ames), 8 illustrations on plates, 3 maps, (2 double-page, the Rancho San Joaquin map folds twice opening to 4 panels); text clean, unmarked. Dark brown Fabrikoid cloth binding, title embossed on front cover within a decorative border, spine similarly titled, illustrated endpapers; binding square and tight, light rubbing. SIGNED by the Author and the printer on the limitation page, with a lengthy gift inscription on the limitation page from Terry E. Stephenson to Philip David "Phil" Swing. Near Fine. Terry Stephenson was Orange County's first great historian. Stephenson served as county treasurer from 1935 to 1943, Santa Ana's postmaster (1923 to 1935), was a key member of the Orange County Historical Society, and a trustee of Bowers Museum. Camino Viejos was among his best-known books. It covers such topics as the killing of Sheriff Barton and the hanging of Juan Flores (Adams, Six-Guns and Saddle Leather, No. 2138). PROVENANCE: This copy INSCRIBED by Stephenson to "Phil Swing," (1884-1963), an American Republican Politician from Imperial County, California. Swing graduated from Stanford University in 1906, studied law, and held most of the city and county offices in Imperial County from 1908-1921. As a member of the United States House of Representative, Swing was known as "The Father of Boulder Dam," because he was instrumental in passing the Swing-Johnson Act in 1928, which authorized Boulder Dam. The project brought water to Southern California and enabled San Diego to grow and prosper. Curtiss, Thomas E. Williams & The Fine Arts Press, No. 2b; Rocq, California Local History, No. 6194. (Inventory #: GO51414-19)
$300.00 add to cart Available from
John Howell for Books
Share this item