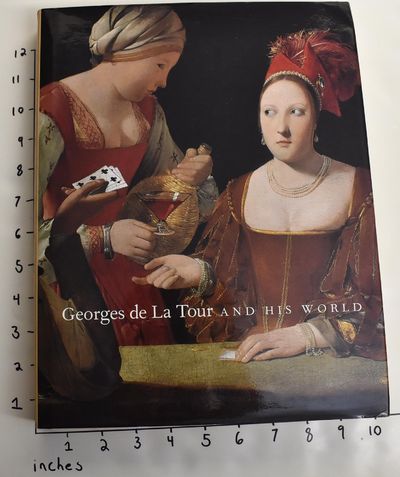 by Conisbee, Philip et al.
New Haven, Connecticut: Yale University Press, 1996. Hardcover. New Book. Red cloth with color-illustrated dj. 319 pp. Numerous color and bw plates. Georges de La Tour (1593-1652) was one of the greatest French painters of the seventeenth century, but his art was rapidly forgotten after his death and has been rediscovered only in our own century. Since the major retrospective exhibition held in Paris in 1972, previously unknown paintings have continued to come to light, such as Saint John the Baptist in the Wilderness, a moving late work discovered in 1994. The exhibition celebrated by this beautiful book presents this and other new additions to La Tour's oeuvre and locates his art in the wider European context of his time. This book offers a complete overview of the life and art of La Tour. Drawing on new historical research, it discusses his career, possible travels, the context in which he worked, and such issues as the contemporary replication and dissemination of his art. It examines the relationship of La Tour's art to the Counter Reformation and to the work of other artists in Nancy, Paris, Rome, and Utrecht. The book also includes the results of recent scientific research into La Tour's materials and working methods.Contents as follows: An introduction to the life and art of George de La Tour / Philip Conisbee -- Gamblers, cheats, and fortune-tellers / Gail Feigenbaum -- La Tour seen from the north: observations on La Tour's style and the chronology of his works / Jean-Pierre Cuzin -- Georges de La Tour and the Netherlandish followers of Caravaggio / Leonard J. Slatkes -- Lorraine in the time of Georges de La Tour / Patricia Behre Miskimin -- Condition and quality / Edmund P. Pillsbury -- Some observations on Georges de La Tour's painting practice / Melanie Gifford, Claire Barry, Barbara Berrie, and Michael Palmer -- Catalogue of the exhibition / Philip Conisbee -- Appendix: La Tour and autoradiography / Claire Barry. (Inventory #: 20029000001)
$29.99 add to cart or Buy Direct from Mullen Books
Share this item