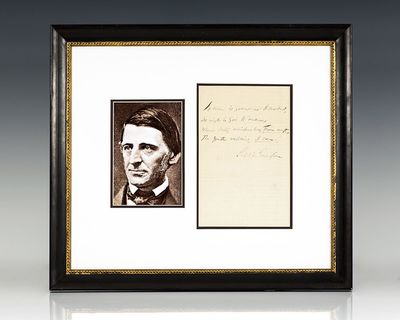 by Emerson, Ralph Waldo
1864. Autographed letter signed by Ralph Waldo Emerson. The letter reads, "Concord 8 Feb. 1864 Dear Mrs. Botter, In obedience to your request send to me through my daughter, I enclose this paper. yours faithfully, R.W. Emerson." Double matted and framed with a photograph of Emerson. The entire piece measures 14.5 inches by 17.5 inches. A very attractive piece. Ralph Waldo Emerson was an American essayist, lecturer, and poet who led the transcendentalist movement of the mid-19th century. He was seen as a champion of individualism and a prescient critic of the countervailing pressures of society, and he disseminated his thoughts through dozens of published essays and more than 1,500 public lectures across the United States. (Inventory #: 64045)
$2,500.00 add to cart or Buy Direct from
Raptis Rare Books
Share this item