The Burden and the Glory: The Hopes and Purposes of President Kennedy’s Second and Third Years in Office as Revealed in His Public Statements and Addresses. 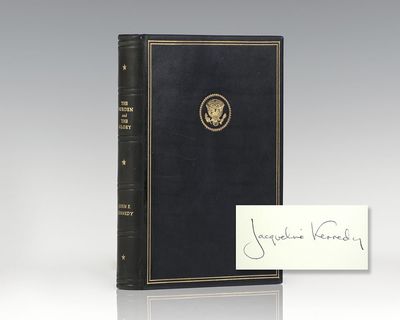 by Kennedy, John F.; Jacqueline Kennedy
New York: Harper & Row, Publishers, 1964. First edition. Octavo, publisher's special presentation issue binding of full blue crushed morocco, front cover double-ruled in gilt, with gilt central presidential seal, spine ruled in blind and stamped and lettered in gilt in compartments, all edges gilt, marbled endleaves. Signed by Jacqueline Kennedy on the half-title page. In near fine condition with some rubbing to the joints, slipcase with some wear. Rare and desirable signed by Jacqueline Kennedy. Allan Nevins has grouped the addresses, excerpts from news conferences and interviews into areas of concern, beginning with the President Kennedy's concepts of government, peace and the international scene, through the flux of international problems to domestic matters -- civil rights, business and agriculture, education and science, with a brief background sketched when necessary. The President's continuing search for methods of promoting world peace is particularly stressed in these selections. It includes his second and third State of the Union addresses, his famous "Ich Ben Ein Berliner" speech, remarks on the Cuban Missile Crisis, comments on race relations and a speech for his trip to Dallas, never delivered. (Inventory #: 37002)
$3,800.00 add to cart or Buy Direct from
Raptis Rare Books
Share this item