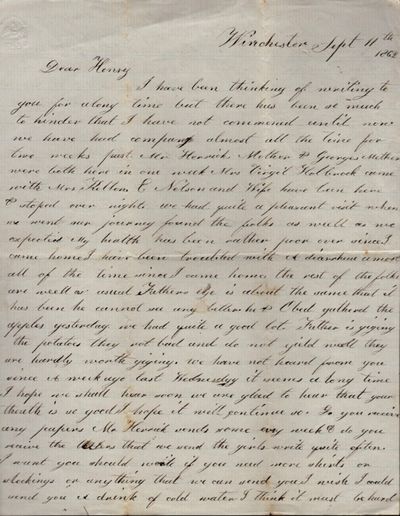 by [Civil War] [Union Army]
Columbian College Hospital, Washington DC; Winchester, 1863. Letter. Very good. 2 letters. The first letter, 2 pages, is written on lined 8" x 10" paper, dated September 11, 1862 from "Winchester". The letter is addressed to "Dear Henry" and signed by "Mother. " Mother discusses the latest news and health of the family. She is glad Henry's health is fine and hopes the letters written to him by a family friend and the "girls" reaches him. She also asks Henry if he needs more shirts and stockings. Mother states, "I wish I could send you a drink of cold water I think it must be hard indeed to have such poor water. I hope this dreadful war will close soon but do not see any prospect of it." The second letter, 4 pages long, dated March 9th, 1863, is written on a sheet of 15" x 10" folded paper. The letter is addressed "Friend Henry" and was written from Columbian College Hospital Washington D.C. and signed at the end by Chas. Wilbur. The contents discuss rumors of the 9th Corps headed to the old Carolina State "but I do not take much stock in it". Wilbur remarks "I am feeling gay as a lark and there is but one thing that troubles me nights, that is the fear of going to the Convalescent Camp..." Most of the letter describes the day to day activities of Chas. Wilbur and hearing or not heraing from other acquaintance's. (Inventory #: 11936)
$150.00 add to cart or Buy Direct from Americana Books
Share this item

York, Pennsylvania : George Shumway , 1968
(click for more details about Longrifles of North Carolina)
View all from this seller>