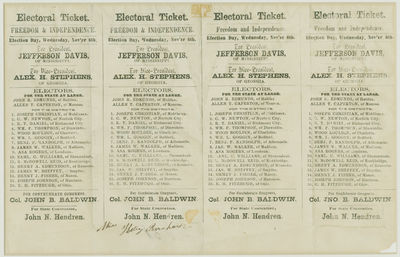 by [Confederate States of America]: [Virginia
[N.p., likely Richmond, 1861. Broadside, matted to 7 x 11 inches, framed to 12 x 15 inches overall. Small marginal adhesive stain at top and bottom center, some wrinkling, small chip to lower right corner, contemporary ink signature in bottom margin. Very good. Matted and framed. An intriguing and exceedingly rare relic from the early days of the Confederacy - an uncut sheet of four Confederate electoral tickets for the Nov. 6, 1861 election for president and vice president of the Confederacy, along with the electors, Confederate Congress, and the state convention for the state of Virginia. Each ticket lists Jefferson Davis for president, Alexander Stephens for vice president, two at-large state electors, sixteen district electors, John Brown Baldwin for the Confederate Congress, and John H. Hendren for the state convention. Davis, Stephens, Baldwin, and Hendren were each elected to his post, presumably along with most or all of the state electors listed on the tickets.

Parrish & Willingham records two 1861 Virginia Confederate electoral tickets, but both are smaller than the present example, the text of which begins: "Electoral Ticket. Freedom and Independence. Election Day, Wednesday, Nov'er 6th. For President, Jefferson Davis, of Mississippi....." Rare, especially as an uncut sheet of four. OCLC lists no physical copies of even a single ticket (Inventory #: WRCAM53752)
$3,000.00 add to cart or Buy Direct from
William Reese Co. - Americana
Share this item