THE LIFE, CRIME, AND CAPTURE OF JOHN WILKES BOOTH, WITH A FULL SKETCH OF THE CONSPIRACY OF WHICH HE WAS THE LEADER, AND THE PURSUIT, TRIAL AND EXECUTION OF HIS ACCOMPLICE 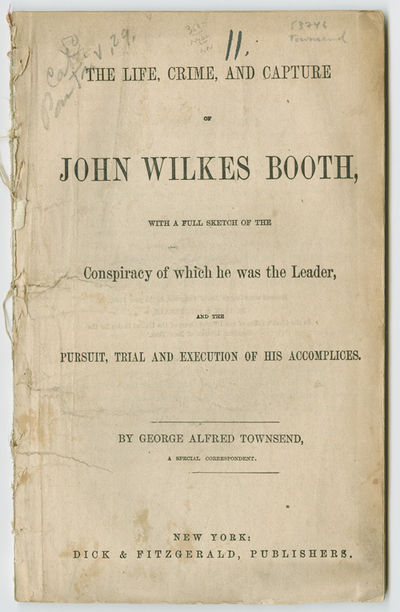 by Townsend, George Alfre
New York: Dick & Fitzgerald, Publisher, 1865. 65,[1],[5]-12,[6]pp. including maps, plans, in-text illustrations, and advertisements, plus engraved frontispiece portrait of Booth. Tall octavo. Original pictorial front wrapper, rear wrapper lacking. Spine mostly perished, front wrapper detached (but present), minor edge wear, a few short closed tears and small chips. Minor scattered foxing, faint dampstain to first several leaves. Good condition. Untrimmed and partially unopened. A scarce work on the assassination of President Lincoln, rife with rich details and a very readable account of the pursuit not only of Booth, but also his accomplices. It was written by George Alfred Townsend, a pioneering war correspondent during the Civil War who covered the Lincoln assassination and its aftermath for the NEW YORK WORLD. The present work collects his early dispatches to the paper and was published near the start of the trial of the conspirators on May 18, 1865, just over a month after the assassination. As such, it is one of the earliest significant works on the Lincoln assassination. The work is illustrated with a handsome three-quarter-length portrait of Booth, pertinent maps of Booth's escape route from inside and outside Ford's Theatre, a plan of the Garrett House and property where Booth died, an engraving of Garrett House, and a map of Maryland focused on the pursuit of the accomplices. Both the Booth portrait (which also decorates the front wrapper) and the Garrett House engraving were taken from HARPER'S WEEKLY. The work is rarely ever found in the original wrappers, is usually disbound or re-bound, and is often found missing the frontispiece portrait of Booth. Howes notes this as the scarcer of two 1865 issues, also listing an 80pp. issue which is most likely later; Monaghan calls this issue the first edition. An attractive copy, retaining the illustrated front wrapper with a bold portrait of President Lincoln's assassin, and with the original frontispiece of Booth intact. HOWES T315, "aa." MCDADE 617. MONAGHAN 781. SABIN 6388. (Inventory #: WRCAM53746)
$1,500.00 add to cart or Buy Direct from
William Reese Co. - Americana
Share this item