AN APOLOGY FOR THE TRUE CHRISTIAN DIVINITY, AS THE SAME IS HELD FORTH, AND PREACHED, BY THE PEOPLE, CALLED IN SCORN, QUAKERS.. 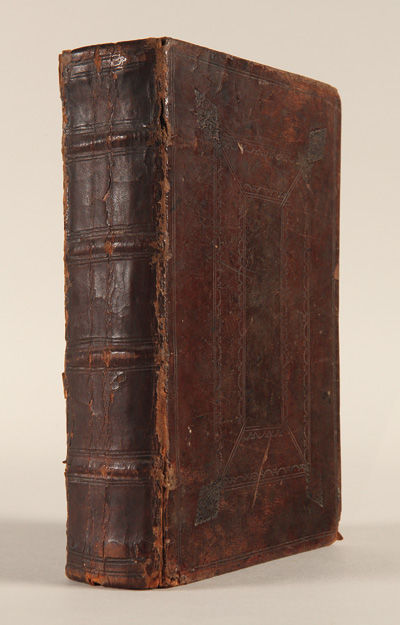 by Barclay, Rober
Newpor: James Franklin, 1729. [10],524 [i.e. 574],[32]pp. including indices. Contemporary calf, ruled in blind. Hinges cracked, spine extremities and corners worn. Contemporary manuscript annotations on rear endleaves. Several closed tears, bottom half of leaf U3 torn away and reaffixed with contemporary pin. Light tanning and scattered foxing. A good copy. First American edition (the sixth edition in English) of this popular work in support of the Quakers, first published in Latin in 1676. "Barclay's great book, the APOLOGY, is remarkable as the standard exposition of the principles of his sect, and is not only the first defence of those principles by a man of trained intelligence, but in many respects one of the most impressive theological writings of the century. In form it is a careful defence of each of the fifteen theses previously published. It is impressive in style; grave, logical, and often marked by the eloquence of lofty moral convictions" - DNB.