THE AMERICAN BIBLE: ORIGINAL LEAVES FROM RARE AND HISTORIC BIBLES PRINTED IN THE COLONIES AND THE UNITED STATES DURING THE SEVENTEENTH, EIGHTEENTH, AND NINETEENTH CENTURIES 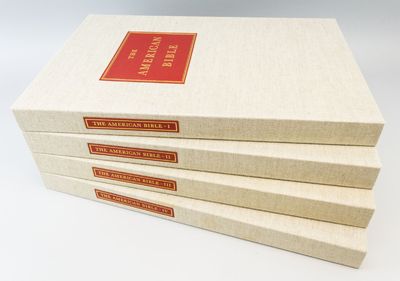 by (LEAF BOOK - BIBLES, AMERICAN PRINTINGS). ZINMAN, MICHAEL, Compiler
Ardsley, New York: Haydn Foundation for the Cultural Arts, 1993. ONE OF 100 COPIES. 580 x 380 mm. (22 3/4 x 15"). Four volumes. Collected, described, and with a preface by Michael Zinman; introduction by Mark Noll. Leaves archivally as well as very attractively matted and housed in four fine hard-shell folding linen portfolios, each with a red morocco label. Prospectus laid in at front of volume I. In mint condition. This is a beautifully presented collection of 38 leaves taken from (incomplete copies of) the most significant editions of the Scriptures printed in the present geographical United States, 1663-1878. The four portfolios contain leaves from eight Bibles in the languages of the native peoples of America, 10 Bibles in English of the 18th and then 10 of the 19th centuries, and 10 Bibles in other languages. Each Bible represented has an important place in the printing and cultural history of America. In addition to Eliot's first Indian Bible in 1663 and to Bibles in Chippewa, Mohawk, Hawaiian, Cherokee, Dakota, and Choctaw, the portfolios contain leaves from the first American Bibles in English, German, French, Spanish, and Hebrew, the first American New Testaments in Greek, Portuguese, Dutch, and Swedish, the first illustrated American Bible, the first printed on American paper and with American-made type, the first Confederate Bible, the first Bible translated by a woman, the first Bible printed for the blind in America, and more. The informative introductory essay, bibliographical descriptions, and commentaries are printed on separate sheets (partly to facilitate display). (Inventory #: CBJ1767)
$8,840.00 add to cart or Buy Direct from
Phillip J. Pirages Fine Books
Share this item

Bavaria or Germany ca. 1470
(click for more details about A COMPLETE VELLUM MANUSCRIPT PROCESSIONAL IN LATIN)

ROSALIND AND HELEN, A MODERN ECLOGUE; WITH OTHER POEMS

London : C.H. Reynell for C. and J. Ollier , 1819
(click for more details about ROSALIND AND HELEN, A MODERN ECLOGUE; WITH OTHER POEMS)
View all from this seller>