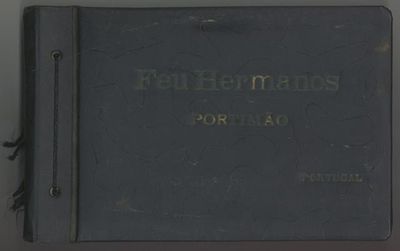 by [Photographic album - Portuguese fish cannery]
Portimao, Portugal: Feu Hermanos, 1950. Oblong album (17 x 26.5 cm.), 15 leaves, with original silver print photographs, captioned in white letterpress on rectos. Text in English, German and French throughout. FIRST EDITION. A promotional photograph album, with a title page and fourteen photographs, depicting the factory building, the trawler fleet, workers loading baskets with fish, a mechanical basket conveyor, sardines being set up to dry and later be boiled, the packing department at work, workers (mostly women), workers sealing the tins mechanically (mostly men), the tin assembling department and the worker's canteen. There is also a very interesting image of the children of workers being fed, with the explanation, "During the months of January to April, whilst the tinning of sardines is not allowed on account of the poor quality of the fish, we feed the workers' children at our expense." Fabrica de Conservas Feu Hermanos was one of the largest fish canning operations in the world, located in Portimao, on the southern coast of Portugal. Feu Hermanos had the advantage of the natural conditions of the meeting point of the Atlantic, the river Arade, and the Mediterranean, conditions that had made this area of Portugal attractive from prehistoric times, through Roman and Islamic occupations. The factory now houses the Museu de Portimao, a museum given to the region's history. Not long ago, the Museu was the site of a brief resurrection of Hermanos' iconic Rose brand sardines. The tissue guards for each photo have been removed, with one exception; photographs and leaves fine. Cord-bound in patterned, black cloth covers with some light soiling; stamped title to front panel. Near fine. Unrecorded. [OCLC locates no copies; no other references to this work identified]. (Inventory #: 5941)
$600.00 add to cart or Buy Direct from
Rabelais: Thought for Food
Share this item

The Annual Family Receipt Book & useful medical adviser, or, Every body's book, containing something for everyone

New-York : A.L. Scovill & Company, Gothic Hall, No. 316 Broadway , 1854
(click for more details about The Annual Family Receipt Book & useful medical adviser, or, Every body's book, containing something for everyone)

Lunching and Dining at Home

New York : Alfred A. Knopf , 1942
(click for more details about Lunching and Dining at Home)
View all from this seller>