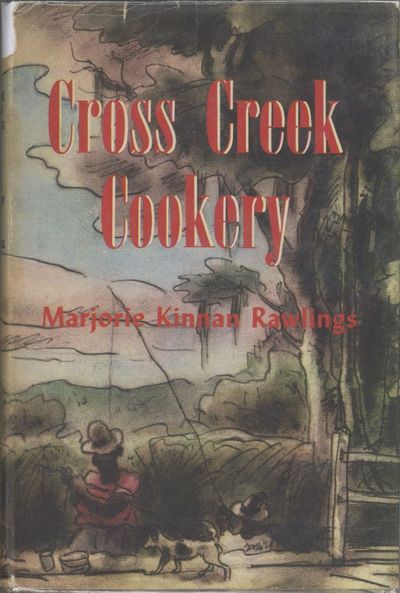 by [Marjorie Kinnan Rawlings]. [Robert Camp, Jr.]
New York: Charles Scribner's Sons, 1942. Octavo (21.5 x 14.5 cm.), xxii, 230 pages. Illustrated endpapers. Full-page black-&-white reproductions of watercolors and illustrated chapter headings. ~ Evident First Edition, in a price clipped dust jacket, thus jacket assumed to be second state. ~ Idiosyncratic, literary elucidation of cookery as described in the memoir of a "northern" transplant to a small community in a corner of Alachua County (in north-central Florida). Widely venerated as a trove of southern fare - Hush Puppies, Collard Greens, Swamp Cabbage, Cow Peas, Poke Weed, Deep-Fried Shrimp, White Bacon (i.e., salt pork in brine), Fordhook Soup, Boiled Grits, Fried Plaintains, Mayhaw (i.e., Hawthorne) Jelly, Cassava Pudding - not to forget the animals of the lowland marshes: Alligator, Gopher, Bear, Coot. Desserts deserve a special place of honor: Pecan Souffle, Loquat Pie, Tangerine Sherbet. ~ It was not a foregone conclusion that Marjorie Kinnan Rawlings (1896-1953) would gravitate to a hamlet in the hinterlands, having studied at the University of Wisconsin and worked as a journalist in Louisville and Rochester up to the age of 32. But in 1928 she purchased an orange grove near Hawthorne, Florida, and set up shop to fulfill an ambition to write. The best-known of her fictional works would be The Yearling (1938), a novel that won the Pulitzer Prize for the following year, but she may well have won as large an audience for her memoir Cross Creek (1942) about her associations with the colorful denizens of inland rural Florida. Cross Creek Cookery followed closely - suggesting that the recipes had been set firmly in place during the writing of the memoir. ~ Robert Camp, Jr. (b. 1910) was a painter and illustrator about whom little is recorded, although it is all but a certainty that he was a member of the well-heeled Camp family of nearby Ocala; it is also probably worth noting that he is not the Robert Camp known to art historians from the circle of Frederic Remington. ~ Closed tear to one leaf (page 147-8); bookplate to front paste-down, otherwise fine in pictorial cloth; dust jacket with chipping to head of spine, and to edges; good only for the jacket. [Brown 494; Cagle 632]. (Inventory #: 6011)
$50.00 add to cart or Buy Direct from
Rabelais: Thought for Food
Share this item