INQUIRY INTO THE CAUSES AND EFFECTS OF THE VARIOLAE VACCINAE: A DISEASE DISCOVERED IN SOME OF THE WESTERN COUNTRIES OF ENGLAND, PARTICULARLY GLOUCESTERSHIRE, AND KNOWN BY THE NAME OF THE COW POX.|AN 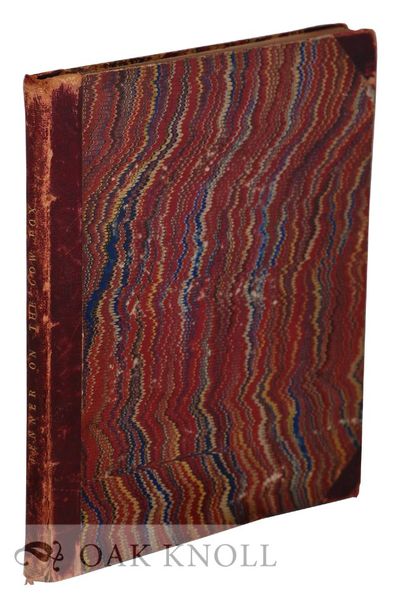 by Jenner, Edward
London, United Kingdom: Sampson Low, for the author, 1800. half leather over marbled paper covered boards. small 4to. half leather over marbled paper covered boards. (v), vi-vii, (i), (1), 2-182, [1] pages. Second edition with 4 hand-colored plates, rear errata, and incorporating the original Inquiry of 1798, the Further Observations of 1799, and A Continuation of Facts and Observations, 1800. From the private library of Dr. Elliott and Eileen Hinkes. This edition is considered definitive, and is the edition usually reprinted (a third edition with minor corrections, but textually the same as the second was published in 1801). Jenner dedicated the second edition to King George III as a sign of his confidence in his research. He provided, via the reprints of his second and third publications on vaccination, new facts, answers to critics, and accounts of the growing evidence in favor of vaccinations. The Continuatio, for example, contains the first recognition of "varioloid" (cowpox and small pox). Jenner coined the term "virus," made the first use of attenuated virus for immunization, and described anaphylaxis in the Inquiry, the foundation for modern immunology and virology.

DEAD GAME. A NOVEL OF SUSPENSE

New York : Charles Scribner's Sons , 1937
(click for more details about MURDER IN BLUE)
View all from this seller>