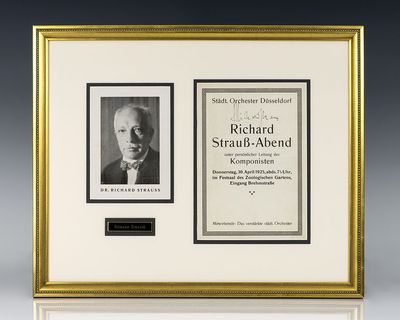 by Strauss, Richard
1925. Richard Strauss signed program. The program was for a concert by the Dusseldorf City Orchestra and Richard Strauss, held April 30, 1925. The program measures 6.5 inches by 8.75 inches. Double matted and framed opposite a photograph of Strauss. The entire piece measures 14.5 inches by 17.5 inches. Richard Strauss was a leading German composer of the late Romantic and early modern eras. He is known for his operas, which include Der Rosenkavalier, Elektra, Die Frau ohne Schatten and Salome; his Lieder, especially his Four Last Songs; his tone poems, including Don Juan, Death and Transfiguration, Till Eulenspiegel's Merry Pranks, Also sprach Zarathustra, Ein Heldenleben, Symphonia Domestica, and An Alpine Symphony; and other instrumental works such as Metamorphosen and his Oboe Concerto. Strauss was also a prominent conductor in Western Europe and the Americas, enjoying quasi-celebrity status as his compositions became standards of orchestral and operatic repertoire. Strauss, along with Gustav Mahler, represents the late flowering of German Romanticism after Richard Wagner, in which pioneering subtleties of orchestration are combined with an advanced harmonic style (Inventory #: 65034)
$1,400.00 add to cart or Buy Direct from
Raptis Rare Books
Share this item