Rare Photograph of the Mining Town of Forest City, California, Before it was Destroyed by Fire in 1883 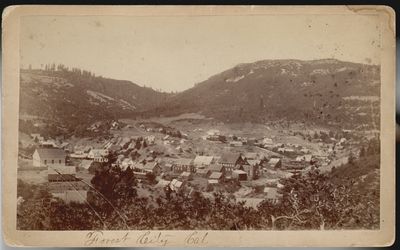 Undated and uncredited albumen photograph (image size 4.75" x 7.75"), identified in a handwritten caption on the mount as Forest City, a town in Sierra County, California, where gold was discovered in 1852. Slight fading and spotting, crack in the glass negative appearing in lower left, but still a clear image of the town; very good overall. By 1854, the town boasted a population of about 1000 and was home to five hotels, a school, a restaurant, two stables, two meat markets, six carpentry shops, four blacksmiths, four clothing stores, several general stores and, of course, many saloons. A telegraph line reached the town in 1855. Forest City suffered several devastating fires over the years, with the worst one occurring in 1883. Although efforts were made to rebuild, most of the mines had dried up, and the town's population began a steady decline. Today it is a ghost town. Early images showing the still-prospering town are quite scarce. (Inventory #: 19245)
$450.00 add to cart or Buy Direct from Walkabout Books
Share this item

Saga of the San Bernardinos

Chicago : Mrs. T.M. Starr , 1896
(click for more details about The Acme Guide to Coloring Photographic Portraits of all Draperies, Backgrounds, &c. in Transparent Water Colors)
View all from this seller>