THE LEGION OF SPACE 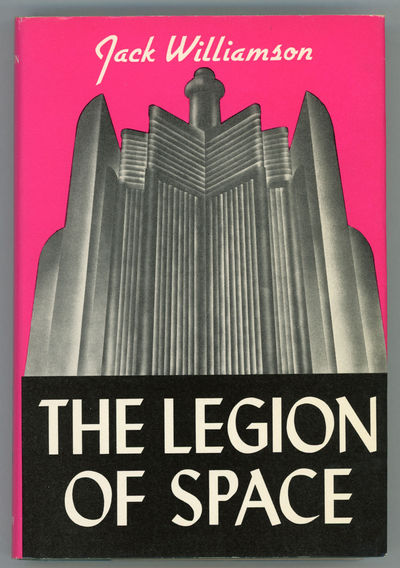 by Williamson, Jack (John Stewart Williamson)
Reading, Pennsylvania: Fantasy Press, 1947. Octavo, cloth. First edition, trade issue. The Solar System is invaded and mankind is nearly annihilated by the Medusae, loathsome aliens from another star system. "There are stylistic and developmental problems with "The Legion of Space," notably the irritating characterizations of the musketeers and John Ulnar; nevertheless the concept of AKKA [a sort of super disintegrator ray] is tantalizing, and the story is carried along by a drive and verve that made it one of the better early space operas." - Bleiler, Science-Fiction: The Gernsback Years 1755. The novel was first published as a six-part serial in ASTOUNDING STORIES, April-September 1934, and was republished as Williamson's first book, preceded by a booklet printing a short story written by Williamson in collaboration with Dr. Miles J. Breuer. Anatomy of Wonder (2004) II-1258. In 333. A fine copy in fine dust jacket with no fade to spine panel. A sharp copy. (#157557) (Inventory #: 157557)
$250.00 add to cart or Buy Direct from L.W. Currey
Share this item
L.W. Currey Inc.
Offered by