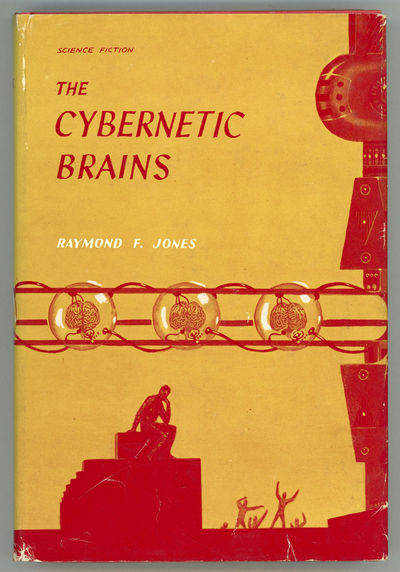 by Jones, Raymond F.
New York: Avalon Books, 1962. Octavo, cloth. First edition. In the twenty-fifth century the brains of two million dead, willed to the State by their donors, monitor the nation's automated factories, creating a land of leisure and plenty for its inhabitants. "But the brains, assumed to be only mindless neutral networks, are not dead. They are alive, conscious of their identity, capable of thought, and agonizingly aware of their fate -- eternal, disembodied slavery in a metal box, When, in time, the directors of the Cybernetics Institute discover the truth about the brains, they keep their findings secret and continue to accept donors. The directors justify their actions on the grounds that the State's entire manufacturing structure, functioning under cybernetic brain control, would crumble without the brain slaves ... [Jones' story] carries the mind invasion to a Dantesque extremity." - Berger, Science Fiction and the New Dark Age, p. 108. Sargent, British and American Utopian Literature, 1516-1985, p. 238. A fine copy in very good dust jacket with light wear at spine ends and front corner tips. (#157548) (Inventory #: 157548)
$65.00 add to cart or Buy Direct from L.W. Currey
Share this item
L.W. Currey Inc.
Offered by