THE AMERICAN BOOK COLLECTOR A MONTHLY MAGAZINE FOR BOOK LOVERS 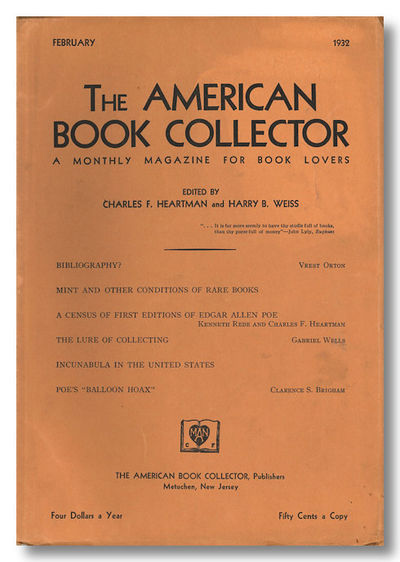 by Heartman, Charles F., et al [editors]
Plainfield [then] Metuchen, NJ, 1935. Thirty-five issues (including double numbers). Volume I:1 through VI:4. Quarto and large octavo. Printed wrappers. Wrapper of first issue worn and snagged, some wrappers occasionally soiled, some nicks and small chips to spine ends, a couple of the double numbers uncased, a few annotations, but a good to very good, contiguous run. Edited by Heartman and Harry B. Weiss, with later associate editors. The foundation years of the long-running periodical, including articles of both national and international relevance for collectors and bibliographers. Heartman's early researches into the publications of Poe appear frequently, along with researches into the careers and publications of Simms, Clemens, Jacobs, Whitman and others. Contributors include Bay, Wells, Brigham, McMurtrie, Muir, Currie, Hills, Scott, Williams, Vail, Starrett, Wegelin, Guthrie, Newton, and many others. The Aug/Sept 1934 number bears, on its cover, an article by Aubrey Starke credited to "Aubrey Beardsley." Postage extra. (Inventory #: WRCLIT78725)
$300.00 add to cart or Buy Direct from
William Reese Co. - Literature
Share this item