Account of the First Voyages and Discoveries Made by the Spaniards in America Containing The most Exact Relation hitherto pub lish'd, of their unparall'd Cruelties on the Indians, in the destruction of a bove Forty Millions of People. With the Propositions offer'd to the King of Spain, to prevent the further Ruin of the West Indies 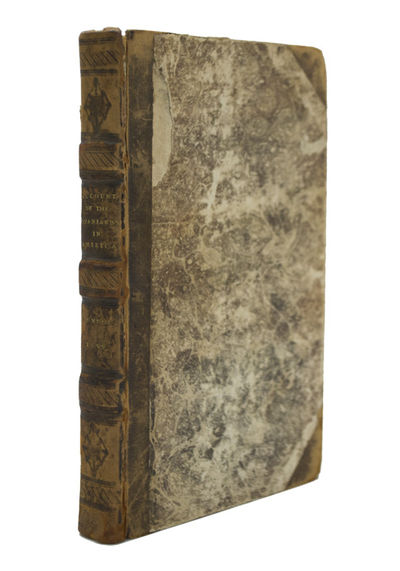 by CASAS, Bartalome De Las
London: J. Darby for D. Brown et al., 1699. Containing The most Exact Relation hitherto pub lish'd, of their unparall'd Cruelties on the Indians, in the destruction of above Forty Millions of People. With the Propositions offer'd to the King of Spain, to prevent the further Ruin of the West Indies. By Don Bartholomew de las Casas, Bishop of Chiapa, who was an Eye- witness of their Cruelties. Illustrated with Cuts. To which is added, The Art of Travelling, Shewing how a man may dispose his Travels to the best advantage. London: J. Darby for D. Brown et al., 1699.

"The art of travelling to advantage" (caption title) begins new pagination on R5r.

Half calf over marbled boards. Spine lettered in gilt. Marbled endpapers. Some rubbing and chipping to boards. A 2-inch closed tear to bottom of page of leaf G2, with no loss of text. Leaves quite foxed as usual. Outer hinges with some splitting, but binding holding firm. Head and tail of the spine with some minor chipping. Over all a very good copy.

Although this is the second edition, according to Sotheby's "this translation, for all intents and purposes, is a separate, new work, much improved over the earlier ones. It was issued with a variant title the same year."

"Said, in the preface, to be 'translated from a new modern French edition,' no doubt the one of 1697, supra. Mr. Helps closes a fine eulogium in the following language: 'His [Casas] career affords, perhaps, a solitary instance of a man who, being neither a conqueror, a discoverer, nor an inventor, has, by the pure force of benevolence, become so notable a figure that large portions of history cannot be written, or at least cannot be understood, without the narrative of his deeds and efforts being made one of the principal threads upon which the history is strung. ... Take away all he said and did, and preached, and wrote, and preserved (for the early historians of the New World owe the records of many of their most valuable facts to him), and the history of the conquest would lose a considerable portion of its most precious material.'" (Sabin, 11289).

"The relations of Las Casas proved a most formidable weapon for any nation on ill terms with the Spaniards...It is to be hoped that the real number inhumanly tortured and slain has been fictitiously doubled many times, otherwise we should be compelled to believe that the torments of purgatory were too moderate for the Spaniards." (Field, 880).