A Narrative of the Life and Medical Discoveries of Samuel Thomson; Containing an Account of His System of Practice, and the Manner of Curing Disease with Vegetable Medicine, Upon a Plan Entirely New, to Which is added An Introduction to His New Guide to Health, or Botanic Family Physician.. 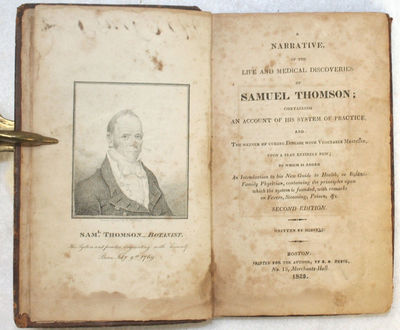 by Thomson, Samuel
Boston: Printed for the author by E.G. House, 1825. Hardcover. Good. Second edition. 4" x 6.75", pp [iv], [13]-224, with frontis portrait of the author. Contemporary full calf. Front joint partially cracked,small chip to head of spine, contemporary ownership signature on front flyleaf, dampstain to about 70 pages, some foxing; binding sound. Good. Sabin 95604. A self-taught practitioner, Thomson (1769-1843) developed and patented a system of medical treatment based on his theory that death results from the diminution of heat in the human body. To produce sufficient heat in ailing patients, he prescribed a regimen of lobelia, cayenne pepper, herbal teas and tonics, and brandy or wine mixed with herbs, followed by a steam bath. He published a manual for using this system and sold it successfully through a large network of agents. "Although he believed that every man should be his own family's physician and opposed the institutionalization of his methods, many of his followers established themselves as professional healers...The establishment of several Thomsonian medical colleges, journals, and infirmaries contributed further to the establishment of the movement as a medical sect....Although Thomson's system proved to be no more beneficial than [mainstream] medicine, its acceptance by a significant portion of the general public caused many physicians to rethink the advisability of relying to such a great degree on bloodletting and calomel, methods that did far more harm than good. Thomson's greatest contribution to the advance of American medicine was the role he played in helping to rid the medical profession of these deleterious practices" (ANB). (Inventory #: 19248)
$325.00 add to cart or Buy Direct from Walkabout Books
Share this item