The Earl of Glamorgan's Negotiations and Colourable Commitment in Ireland Demonstrated; or, The Irish Plot for Bringing Ten Thousand Men and Arms into England, whereof Three Hundred to Be for Prince Charles's Lifeguard; Discovered in Several Letters Taken in a Packet-Boat by Sir Tho. Fairfax Forces at Padstow in Cornwall, which Letters Were Cast into the Sea, and by the Sea Coming in, Later Regained and Were Read in the Honourable House of Commons; Together with Divers Other Letters Taken by Captain Moulton at Sea Near Milford-Haven Coming Out of Ireland, Concerning the Same Plot and Negotiation 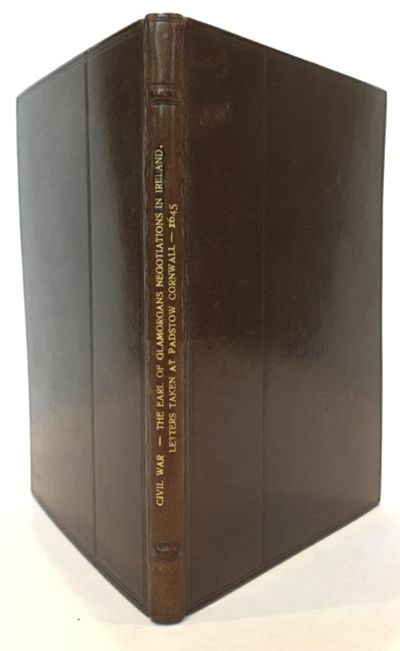 by Worcester, Edward Somerset, Marquis of ]
London: Printed for Edward Husband, Printer to the Honorable House of Commons, 1646. First edition (a second edition appeared the same year, with the printed date "1646"). Small 4to (7 1/4 x 5 3/8 inches). 35 pp. Title enclosed within an ornamental border. in the midst of Civil War, Somerset (1601-1667), "having been created Earl of Glamorgan [in 1644], was selected for a mission of the highest importance. The scheme had been mooted of retrieving Charles I's fortunes in England by calling in the Irish rebels and Roman Catholic troops from abroad. Glamorgan was marked out for this delicate and dangerous enterprise by his wealth, by his intimate connection through his second marriage with the Irish nobility, and by his devotion to the Roman Catholic religion. The genuineness of the commissions and of the patents of authority of which he acted, a question involving the character of Charles I, has since been one of the most intricate and fiercely debated points in English history ... he was to raise two armies, each of ten thousand Irish ... [and was eventually] authorized to treat with the confederate Roman Catholics in Ireland ... Glamorgan interpreted these commissions as authorising him to make any terms he pleased ... he signed the secret 'Glamorgan' treaty, by which the Roman Catholics were granted possession of all the churches they had seized ... in return they promised ten thousand men ... [but] the King disavowed the treaty" (DNB). Glamorgan was then arrested, but released and returned to his commands, eventually losing support and fleeing to France, returning to Cromwell's England to suffer, until his estates were returned at the restoration. ESTC R200673. Wing W3533. Very good copy in a nice modern binding. 20th-century brown morocco (a little scuffed), gilt spine title, by Bayntun. (9791). (Inventory #: 62221)
$2,000.00 add to cart or Buy Direct from
Bartleby's Books
Share this item