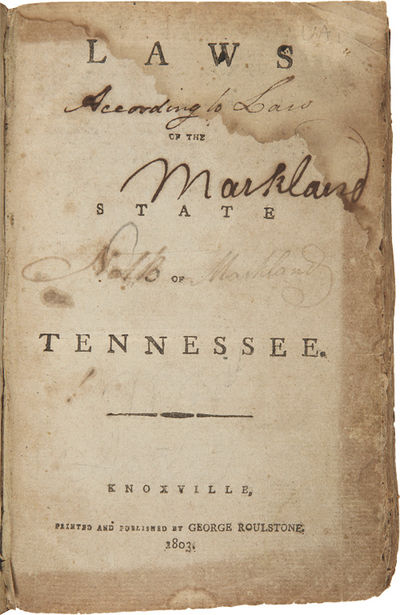 by [Tennessee Laws]
Knoxville: Printed and published by George Roulstone, 1803. viii,320,[16]; 143,xi pp. Contemporary reverse calf. Spine slightly chipped, boards rubbed, corners lightly worn. Remnants of shelf label and manuscript date on spine. Later ownership inscription on front pastedown and annotation on titlepage. Initial leaves dampstained. Browning and scattered foxing. Final leaf of second work detached and in facsimile (contains only a dozen lines of index). Very good in original condition, untrimmed. In a half morocco box. The first collected laws of the state of Tennessee, and a work of considerable rarity. Allen notes that this was not an official publication of the state, but issued by Roulstone, Tennessee's first printer, as a speculative venture. Because all previous issues of the Tennessee press were either pamphlets, broadsides, or legislative journals, this has been called the first book printed in Tennessee. Allen asserts, however, that Roulstone may have previously bound together some early Legislative Acts printed in Knoxville before 1800. "Possibly it is the first bound book printed in the state. The fact that it was issued bound (increasing the possibility of survival) and the knowledge that Roulstone printed the book as a personal venture should render this book somewhat more likely to be found. Nonetheless, it is virtually never offered for sale today" - Allen. This copy bears the ownership inscription of Edward T. Sanford, a prominent Knoxville lawyer, who served as Assitant Attorney General from 1905 to 1907 and as a Supreme Court Justice from 1923 to 1930. It is also bound with a copy of the acts passed in the first session of the state legislature in the same year, very scarce in and of itself. A primary work of much importance and rarity, with an interesting Tennessee provenance. ALLEN RARITIES 13. ALLEN TENNESSEE IMPRINTS 79, 72. AII (TENNESSEE) 22, 46. McMURTRIE (TENNESSEE) 38, 42. (Inventory #: WRCAM53602)
$12,000.00 add to cart or Buy Direct from
William Reese Co. - Americana
Share this item