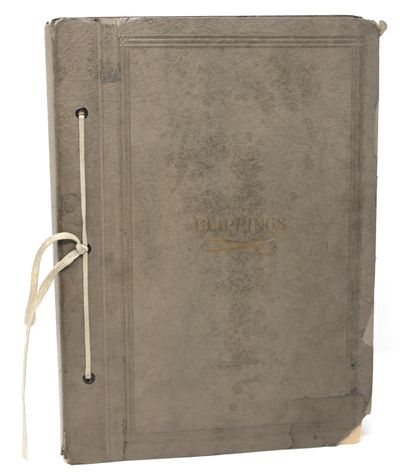 by [Catlin, George B.]
np, nd. Paperback. Very Good. Ribbon-bound scrapbook with dull gilt “Clippings” and scissors image on the front cover, 20 by 28 cm, 41 leaves of which all are used, recto only. Covers have some light dampstains and edge wear, with chips at the corners and spine ends. The leaves are yellowed and brittle, with a couple of small edge chips, but the album is stable with all pages intact. The clippings appear to date from the late-1920s to early-1930s and are from The Detroit News. They feature a series of articles by George B. Catlinâ€”historian of The Detroit Newsâ€”titled “The Who, Why and Wherefore of Detroit’s Street Names.” “Detroit is rich in traditionsâ€”traditions that have accumulated over 225 years of adventure, struggle and achievement. Yet, a vast majority of the more than 1,500,000 who live and prosper within its limits carelessly assume that their city has no historic background to which they might turn with pride and upon which they might found hopes of its greater future," writes Catlin. "Most of the street names are biographical in their significance: for in them are found the names of many early settlers, the owners of the old French ribbon farms, merchants, mayors, legislators, statesmen of long agoâ€”men who played important parts in the history and upbuilding of the City of Detroit and the State of Michigan. In a series of brief articles, it is the purpose of The Detroit News to give some interpretation of these street names, and a glimpse into the personality of those whose memory the names perpetuate.” The illustrated series, neatly clipped and pasted into this album, details dozens of Detroit street names, including Abbott, Atwater, Bates, Cass, Clark, Hudson, Lincoln, Madison, Griswold, McDougall, Rowland, Tillman, Wayne, Vinewood, Wabash, Woodward, etc. At the end of the scrapbook are four leaves of clippings about monuments dedicated to the city’s pioneers. Also, laid in are three clippings about the death of Mr. Catlinâ€”historian, author of The Story of Detroit, and Detroit News staffer for over four decades. (Inventory #: 2309)
$90.00 add to cart Available from Bay Leaf Books
Share this item

by White, Albert B.