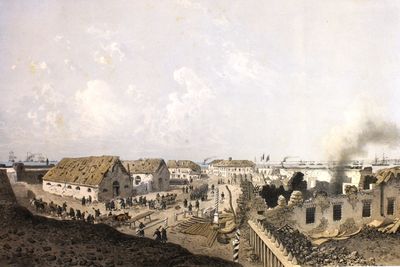 by Paris, (François-Edmond)
A beautiful and rare album comprising title page, a map showing the location of the naval battle of Kil-Bouroun (Kinburn), and 15 chromolithographic plates depicting mostly maritime scenes after the battle along the ice-bound Dnieper River, including inside the fort, disembarking onto the ice, and ruined fortifications, lithographed and colored by Eugene Ciceri and Adolphe Bayot, the ships drawn by Antoine Léon Morel-Fatio, after drawings by Paris. Some details appear to be hand-colored. Some scattered foxing, small stain to inside front cover, a few small tears along binding, spine very slightly shaken. Folio. Full leather, raised spine. Paris (Arthus-Bertrand/Becquet Freres) n.d. (circa 1856). The Battle of Kil-Bouroun (Kinburn) took place during the final phase of the Crimean War, on October 17, 1855, at the tip of the peninsula of Kinburn along the Dnieper River in modern-day Ukraine. During this naval battle, the British and French forces destroyed the Russian navy, having attacked them with a fleet of ironclad ships. The decisive battle helped to signify the decline of the traditional wooden warship. Very scarce; as of February 2020, WorldCat locates only two holdings in North America of this suite. (Inventory #: 48752)
$7,500.00 add to cart or Buy Direct from
Bernett Penka Rare Books
Share this item

by Robakowski, Józef and Exchange Gallery


(click for more details about Erna Rosenstein. Malarstwo [Painting])
View all from this seller>