The White Bulletin No. 13 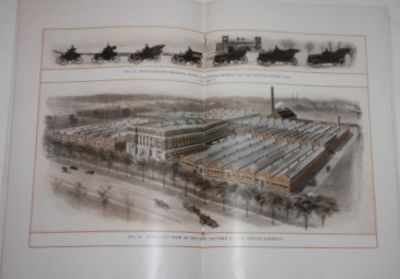 Cleveland, Ohio: The White Company, August, 1907. First edition. Pictorial Wraps. Very Good. An early automobile promotion! 4to. 24.5 by 17 cm. 24 pp., which include the wrapper covers. As a "Bulletin", this is not a catalogue per se, but it is ultimately promoting the White Company's line of steam cars, which were highly regarded vehicles at the time -- 1907, the year of the promotion, is a year before the advent of the Model T. The bulletin devotes much of its space to the company's factory and not just the car and how it was developed. Thus the front and rear cover features two photos of the factory floor. Yet unmistakably the purpose is to showcase the car. In an attractive two page centerpiece spread we are shown a procession of seven successive models of the White Steam Car above a large bird's eye view of the company's expansive plant, and among the many other photos and illustrations are two dignified illustrations of the company's car with a limo body. The White Company was begun around 1900 and remained in business until 1980, making also buses, trucks, sewing machines, roller skates, etc. A breakthrough of sorts for the company was achieved in 1907, the year of this bulletin, when President Roosevelt authorized the Secret Service to follow the Presidential coach in a White Steam car. And in 1911, President Taft purchased a White Steam car as one of four Presidential automobiles. The company started building gasoline-run cars in 1908 and its last steam cars were made in 1911. Condition: tiny corner chip on upper rear of wraps. Otherwise, light wear. (Inventory #: 005892)
$175.00 add to cart Available from
White Fox Rare Books & Antiques
Share this item
White Fox Rare Books and Antiques
Offered by