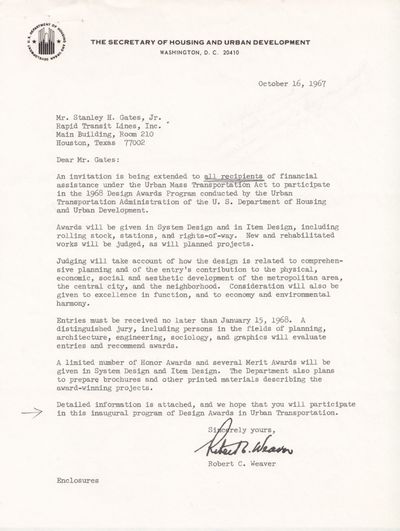 by Bush, George W. ; Weaver, Robert C.
Washington, D. C., 1967. Three items: (1) TLS on HUD stationery from Robert C. Weaver with enclosures; (2) Retained TLS from friend of Congressman Bush; (3) TLS on Congressional letterhead from Bush in response to item 2. Very good: small holes from removed staples, Bush letter with thin 4" vertical stain at right margin; HUD brochure fair with only 1 leaf (of 2? ) present. In 1965, the Department of Housing and Urban Development was created. Robert C. Weaver was its first secretary and the first African-American appointed to a cabinet level position. In 1968, HUD's Transportation Administration held a Design Awards Program. The items offered here include a typed letter signed by Weaver regarding the awards program as well as a brochure and entry form. The letter and brochure was mailed to Rapid Transit Lines, Inc. , then the operator of Houston's public transport. Don Lambert, a friend of Congressman Bush, was an executive at Rapid Transit. He made copies of the HUD materials and forwarded them to Bush, complaining, "Federal monies are being wasted on awards programs instead of providing an efficient transportation system. " Bush's letter thanks Lambert for the update. An interesting series of letters joining a pioneering African American with our 41st President. Please do not hesitate to contact us for additional information and/or photos and we will respond promptly. We package our items carefully, ship daily, and have a no hassle returns policy--your satisfaction is guaranteed. We are members of the Antiquarian Booksellers' Association of America (ABAA) , the International League of Antiquarian Booksllers (ILAB) and the Independent Online Booksellers Association (IOBA) and adhere to their rules of ethics. (Inventory #: 884)
$300.00 add to cart or Buy Direct from
Langdon Manor Books
Share this item