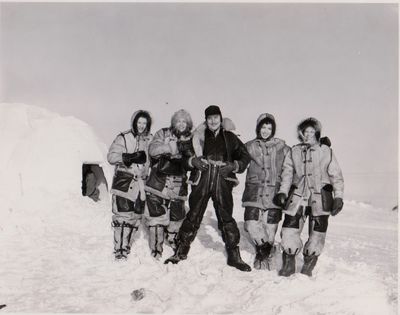 by Gardiner, Reginald
Manitoba, Canada, 1944. 14¾" x 11¾". Full leather album, internally string tied. 100 pages, the first 27 with 70 black and white photos and five items of ephemera adhesive mounted; the rest are blank. An additional 55 photos and two items of ephemera laid in. Most photos measure 4" x 5". Photos in album are captioned, others are not. Album externally good: lacking the back strip and with significant edge wear and losses at corners; internally near fine or better. Reggie Gardiner was a well known comedic stage actor and mimic in England before hitting Broadway and ultimately tackling Hollywood. His first Hollywood movie was in 1936 and he appeared in over 100 films as, according to an obituary, "the amiable ass. " He was best known for his role in Chaplin's The Great Dictator and a news clipping in the album suggests he was more well known as a socialite, for a time acting as Hedy Lamarr's favorite escort. This album documents Gardiner's time as a headliner in the Kay Francis Show, which toured central and western Canada and Alaska for several weeks in February 1944, entertaining troops at around 50 American, as well as Canadian, camps. Many of these were in remote Arctic areas whose locations were kept secret and some of the men had not seen women for months. One of Gardiner's captions reads, "the picture on the opposite page is typical of the outposts we saw-as for instance Eskimo Point which juts out into the Hudson Bay simply miles and miles and miles from anywhere. " News reports stated that the events at Canadian military outposts were the first U. S. O. Performances outside an American military base. The album reflects infectious happiness injected into an exceptionally harsh climate. The photos include group shots, rehearsals and performances, a group of men dressed in drag, receptions and dinner parties, and the entertainers mixing with soldiers. Others show the troupe serving food to soldiers and visiting them in the hospital. One interesting shot shows Gardiner and another man gawking at a Vargas centerfold, while a great series shows the group outside with dogsleds, igloos, and Native American guides. Another shows Kay Francis sitting at a mess hall bench with soldiers while one shovels food into her mouth, and one image shows Francis on their plane doing her nails. The ephemera include a letter to Gardiner from the commanding officer, an NC-17 rated poem in Gardiner's hand and the first three leaves of the Eskimo Phrase Book For United States Armed Forces, a mimeo that does not exist on OCLC. There's also a map of North America with Gardiner's flight paths drawn in blue. A wonderful collection of well composed images, documenting this little known, and clearly successful, attempt to bring warmth and joy to troops way up north. This item is offered by Langdon Manor Books, LLC, antiquarian booksellers. Please do not hesitate to contact us for additional information and/or photos and we will respond promptly. We package our items carefully, ship daily, and have a no hassle returns policy--your satisfaction is guaranteed. We are members of the Antiquarian Booksellers' Association of America (ABAA) , the International League of Antiquarian Booksllers (ILAB) and the Independent Online Booksellers Association (IOBA) and adhere to their rules of ethics. (Inventory #: 1034)
$1,500.00 add to cart or Buy Direct from
Langdon Manor Books
Share this item