Cup of Gold: A Life of Sir Henry Morgan, Buccaneer, with Occasional Reference to History. 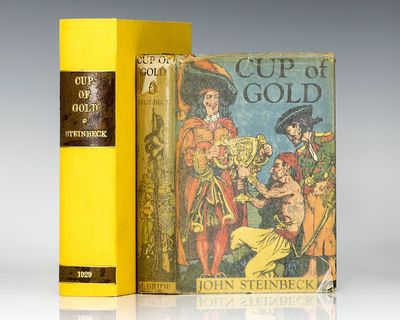 by Steinbeck, John
New York: Robert M. McBride & Company, 1929. First edition of Steinbeck's first book one of about 1500 copies. The publisher printed 2476 copies, 939 of which were remaindered as unbound sheets. Octavo, original cloth. Fine in a near fine dust jacket with light rubbing to the extremities. Comes with the original publisher's glassine. Housed in a custom cloth case. Rare, especially in this condition. Written when Steinbeck was 27 years old and published in an edition of 2476 copies just two weeks before the stock market crashed, Cup of Gold is a historical romance about the life of the pirate Henry Morgan" (Valentine 1). From the mid-1650s through the 1660s, Morgan, a pirate and outlaw of legendary viciousness, ruled the Spanish Main. He ravaged the coasts of Cuba and America, striking terror wherever he went. Morgan was obsessive. He had two driving ambitions: to possess the beautiful woman called La Santa Roja and to conquer Panama, the "cup of gold." Steinbeck's first novel and sole work of historical fiction. (Inventory #: 70009)
$15,000.00 add to cart or Buy Direct from
Raptis Rare Books
Share this item

The Law of God.