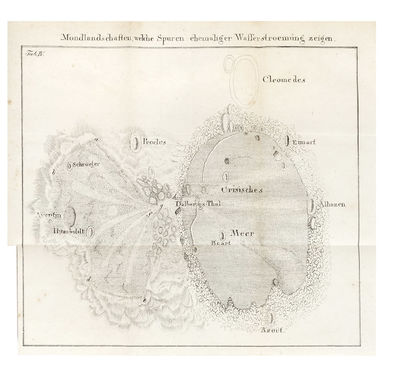 by GRUITHUISEN, Franz von Paula
Four folding plates (three are engraved & the moon map is lithographed). xxiii, 446 pp., 1 leaf of errata. 8vo, cont. slick boards. Munich: I.J. Lentner, 1812. First edition of this varied and interesting book, reflecting the author's wide-ranging interests. Gruithuisen (1774-1852), studied philosophy, medicine, and natural history, and was first appointed professor of medicine at the University of Munich and was later made professor of astronomy at the same institution. Gruithuisen wrote on many subjects and his works are well-known for their numerous new observations and thoughts. The present work contains chapters on physiology, electricity, geology, optics, and astronomy. In this book, the author describes his discovery that light comes out of the eyes of animals (see Gorin, History of Ophthalmology, p. 97). Also contained here is Gruithuisen's important paper "on the erratic blocks of the South Bavarian plain, wherein he stated that they had been brought from the neighbouring Tyrolese and Bavarian Alps. He advanced the idea that glaciers had transported them to the low Alpine levels, and then the ice-masses in which the erratics were wedged had been borne northward across the plains by enormous floods...As the ice-masses melted, the erratics were left in their various positions. This was in substance the conception adopted by Karl Schimper several decades later."-Zittel, p. 229. Gruithuisen's astronomical interests are reflected by the lithographed plate which is a map of a portion of the moon. Gruithuisen was a notable and imaginative observer of the features of the moon; the refractors from Munich, with their sharp images and easy handling, opened a new way for the study of the moon. See Whitaker, Mapping and Naming the Moon, pp. 109-14-(but not knowing of this work). Fine copy and scarce. The engraved plates are a little foxed. ❧ Hirsch, II, pp. 873-74. Poggendorff, I, 964-65. (Inventory #: 6013)
$2,500.00 add to cart or Buy Direct from
Jonathan A. Hill, Bookseller
Share this item
Jonathan A. Hill, Bookseller, Inc.
Offered by