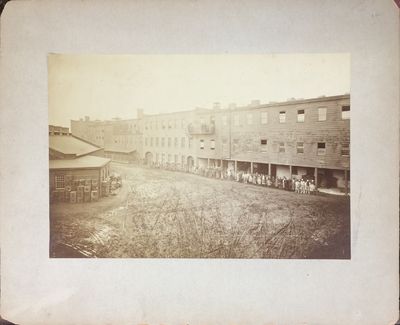 Silver gel photograph depicting around 100 men standing outside of a warehouse, in an unknown city. Photograph measures 13" x 8 ¼" and is mounted on grey cardboard which measures 17" x 14". Photograph has moderate toning, light silvering and light soiling; mount is chipped at all corners, and has moderate soiling and wear to all edges; blank on verso. Image was likely taken in the mid-19th century. The image depicts a three story building with many windows and chimneys, and built from both brick and wood. The brick portions of the warehouse are outfitted with masonry stars, and seven large wooden barrels covered by an awning are seen at the left edge of the photo. The photographer captured this image from a loading and shipping zone. A large portion of the photograph depicts a dirt lot with wheel tracks carved into it, along with many wooden boxes and other shipping materials. Acquired with another photograph we know that this large warehouse building was located on the corner of Harrison Ave, and was surrounded by many other buildings and cobblestone streets. Many of the men in this photograph are wearing aprons, most are standing out front of the building, but some are standing on a porch located off of the third floor, and a few men can be seen looking out from windowsills. An intriguing group photograph. . (Inventory #: 014648)
$425.00 add to cart Available from
Back of Beyond Books
Share this item