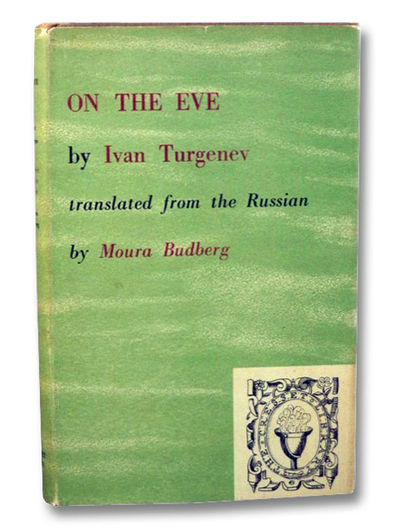 by Turgenev, Ivan; Budberg, Moura (Translator)
The Cresset Press, 1950. First Edition. Hard Cover. Very Good/Very Good. First English translation. Includes original jacket. Pages toned, boards, jacket reverse and endpapers foxed. 1950 Hard Cover. 118 pp. First appearance in English of Turgenev's third book. Translated from the Russian by Moura Budberg. "Turgenev is an author who no longer belongs to Russia only. During the last fifteen years of his life he won for himself the reading public, first in France, then in Germany and America, and finally in England. In his funeral oration the spokesman of the most artistic and critical of European nations, Ernest Renan, hailed him as one of the greatest writers of our times: 'The Master, whose exquisite works have charmed our century, stand more than any other man as the incarnation of the whole race', because 'a whole world lived in him and spoke through his mouth'. Not the Russian world only, we may add, but the whole Slavonic world, to which it was 'an honour to have been expressed by so great a Master'. As regards his method of dealing with his material and shaping it into mould, he stands even higher than as a pure creator. Tolstoy is more plastical, and certainly as deep and original and rich in creative power as Turgenev, and Dostoevsky is more intense, fervid, and dramatic. But as an artist, as master of the combination of details into a harmonious whole, as an architect of imaginative work, he surpasses all the prose writers of his country, and has but few equals among the great novelists of other lands. To one familiar with all Turgenev's works it is evident that he possessed the keys of all human emotions, all human feelings, the highest and the lowest, the novel as well as the base. But there was in him such a love of light, sunshine, and living human poetry, such an organic aversion for all that is ugly, or coarse and discordant, that he makes himself almost exclusively the poet of the gentler side of human nature. We may say that the description of love is Turgenev's speciality. (Inventory #: 2197643)
$20.00 add to cart or Buy Direct from
Yesterday's Muse
Share this item
Yesterday's Muse, Inc.
Offered by

A Chapter of Erie

O-Neh-Da Te-Car-Ne-O-Di; or Up and Down the Hemlock. Including History, Commerce, Accidents, Incidents, Guide, Etc